Broncos Hold off Chargers in 4th, Advance to AFC Championship 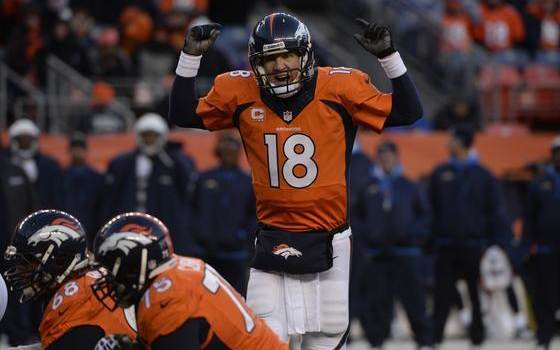 After entering the 4th quarter with a 17-0 lead, the Denver Broncos were able to hold off the Chargers, 24-17. The win over the Chargers advances the Broncos to the AFC Championship Game against the New England Patriots. Peyton Manning tossed two touchdown passes to Demaryius Thomas and Wes Walker to give the Broncos an early 14-0 lead. A Matt Prater field goal gave the Broncos a 17-0 lead in the third. In the fourth quarter, the Chargers and Broncos exchanged touchdowns.

Trailing 24-7 with 8:12 left in the game, the Chargers responded with a touchdown and a field goal. San Diego quarterback Philip Rivers threw his second 16-yard TD pass to Keenan Allen, then the Chargers recovered onside kick which led to Nick Novak's 44-yard field goal to narrow the score to 24-17 with 3:53 remaining in the game.

Starting from their own 22 yard line, the Broncos were penalized 5-yards for a false start. Knowshon Moreno was tackled for loss of 2-yards on the next play followed by Manning's incomplete pass. Facing third-and-17 from their own 20, it appeared as if the Broncos were going to give the Chargers another crack on offense. However, San Diego's secondary left Julius Thomas wide open on the right sideline which Manning took advantage for a 21-yard pass and a Denver first-down on their own 41-yard line. San Diego had a few more chances to stop the Broncos, but Denver made the plays down the stretch to run out the clock and win the game.

The Broncos beat the Chargers at their own game -- namely ball control as Denver's offense controlled the ball for 35:27 compared to San Diego's 24:33 time of possession. 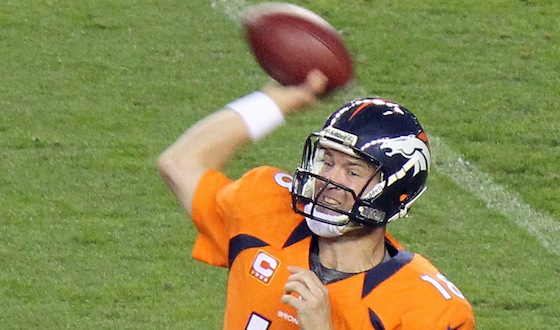 Peyton Manning was 25 of 36 for 230 yards, 1 interception and 2 touchdowns for a 93.5 passer rating. The 230 yards brings Manning to 5,909 career postseason passing yards, surpassing Joe Montana (5,772) and Brett Favre (5,855) for second-most passing yards in NFL history. Manning trails Tom Brady who now has has 6,147 career postseason passing yards. Moreno added 82 rushing yards on 23 attempts for a TD and Ball had 10 carries for 52 yards as the Broncos were able to come up with 133 total net yards on the ground.

Philip Rivers completed 18 of 27 passes for 217 yards, 0 interceptions and 2 TD passes for 115.8 passer rating. Keenan Allen led all receivers with 142 receiving yards (6 receptions and 2 TDs). San Diego could only muster 65 yards on the ground.

Philip Rivers was sacked twice on the Chargers' opening drive. An incomplete pass followed the second sack, and San Diego was forced to punt. Starting from his own 9-yard line, Peyton Manning engineered a 14-play, 86-yard TD drive that consumed 7 minutes for the 7-0 lead. The TD drive was capped off by Manning's pass to wide receiver Demaryius Thomas.

Denver's defense forced the Charger's to punt on the ensuing posession. Starting from their own 42-yard line, Manning completed a 7-yarder to Wes Welker on first down, followed by 1-yard gain by Knowshon Moreno. On third down, Julius Thomas was hit hard as he tried to catch Manning's ball, but Charger's safety Jahleel Addae was able to force the fumble which was recovered by cornerback Richard Marshall. The play was confirmed as a fumble upon review, and the Chargers had possession at their 44-yard line.

Down 7-0, it appeared as if the Chargers would be able put points on the board. San Diego was able to advance the ball to the Broncos' 30-yard line thanks to runs of 16-yards by Ryan Mathews and 6-yards by Danny Woodhead. Facing a manageable third-and-three, however, Philip Rivers was sacked for a loss of five yards by defensive end Malik Jackson. San Diego kicker Nick Novak attempted a 53-yard field goal, but slipped as he was planting his foot and the kick went wide left.

Thanks to two defensive penalties on the ensuing possession, Manning and the Broncos advanced the ball 57-yards down the field in 9 plays to increase their lead to 14-0 thanks to a 3-yard reception by Wes Welker with 6 minutes remaining in the half. The Chargers didn't muster up much offense and were forced to punt. On the punt return, it looked as if the Broncos would put up another 7 points on the board. However, after breaking several tackles, Eric Decker tripped over his own feet and a 47-yard punt return. Starting from the Chargers 30-yard line, Peyton advanced the Broncos deep into the red-zone. However, on third-and-goal from the 4, Manning's pass intended for Decker in the back of the end zone fell short and was intercepted by linebacker Donald Buttler for the touchback.

Rivers took a knee to end the first half, 14-0 in Denver's favor.

Denver started the second half with the ball as Trindon Holliday advanced the kickoff to the 36-yard line. The Broncos were able to march the ball all the way down to San Diego's 22-yard line. But, a false-start pushed the Broncos back 5-yards and Manning's pass attempt up the middle to Wes Welker was incomplete. Matt Pricker converted the 45-yard field goal to extend Denver's lead to 17-0.

After stopping the Chargers offense yet again, the Broncos started at their own 20 and drove the ball to San Diego's 36. A neutral zone infraction gave the Broncos a first-and-five at the 31-yard line. However, the Chargers' defense was able to hold Denver to field goal attempt. Prater was unable to convert the 47 yard-field goal as it missed wide left. With 1:07 remaning in the third quarter and starting from their own 37, the Chargers were able to put points on the board. A 30-yard Rivers completion to Royal put the Chargers at Denver's 20. Four plays later Rivers connected with Keenan Allen for a 16-yard TD pass to narrow the score to 17-7. The Broncos responded on the ensuing possession with 9-play 81-yard drive capped off by Knowshon Moreno's 3-yard run up the middle for the touchdown. 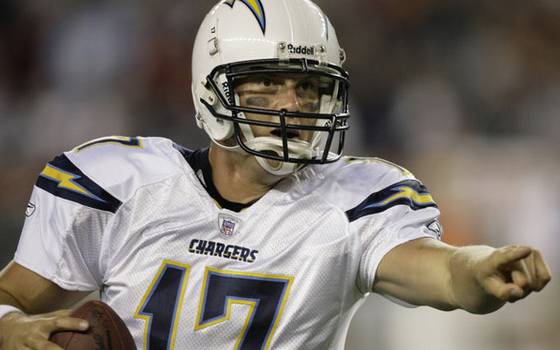 The Chargers, however, didn't give up.

Faced with a 4th and five from their own 25, the Chargers decided to go for it. On the play Rivers connected with Allen for 49 yards to advance the ball to Denver's 26 yard line. Two plays later, Rivers threw his second touchdown pass to Allen. Philips drove the Chargers 80 yards in 7 plays while only consuming 2:29 on the drive.

The Chargers then recovered their on-sides kick at their own 40. Rivers was able to advance the Chargers all the way to Denver's 17 thanks partly to passes of 17-yards and 25-yards to Allen. However, the Chargers offense was unable to score a TD and were forced to settle for Nick Novak's 44-yard field goal to narrow the score to 24-17 with 3:53 remaining in the game.

Starting from their own 22 yard line, the Broncos were penalized 5-yards for a false start. Knowshon Moreno was tackled for loss of 2-yards on the next play followed by Manning's incomplete pass. Facing third-and-17 from their own 20, it appeared as if the Broncos were going to give the Chargers another crack on offense. However, San Diego's secondary left Julius Thomas wide open on the right sideline which Manning took advantage for a 21-yard pass and a Denver first-down on their own 41-yard line. San Diego had a few more chances to stop the Broncos, but Denver made the plays down the stretch to run out the clock and win the game.

The Denver Broncos will play the New England Patriots in the AFC title game without Chris Harris, who suffered a torn ACL against the San Diego Chargers Sunday.

Harris left Sunday's game against the Chargers in the third quarter with what was described as knee and ankle injuries.

However, team officials were far more concerned about Harris' knee in the hours following the game after a preliminary exam showed a possible torn ligament.

He is expected to have surgery when the swelling in the knee subsides and begin what is expected to be a six- to nine-month recovery. He will not participate in the team's offseason programs and would likely miss at least some of training camp and preseason.

After making the team as an undrafted rookie in 2011, Harris has developed into the team's most consistent defensive back this season.