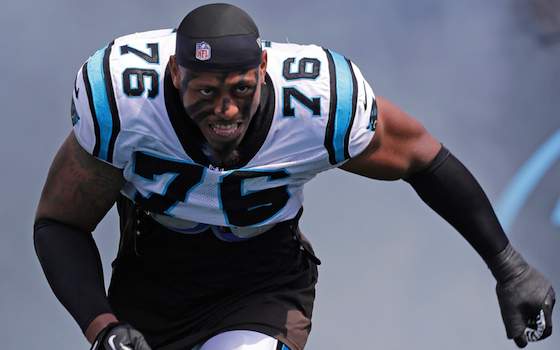 Brees completed 24 of 31 passes (77.4 percent) for 381 yards with four touchdowns and no interceptions for a 157.4 passer rating in the Saints' 42-17 win over Tampa Bay. He also had a nine-yard touchdown run. With the victory, the Saints clinched a playoff berth.

It marked the 25th game in his career with at least four touchdown passes, the second-most in NFL history.

Brees has five games in his career with a passer rating of at least 150.

He is the first quarterback in NFL history to complete 75 percent of his passes with at least 350 yards, four touchdowns, no interceptions and a rushing touchdown in a single game.

Brees, who was selected to his eighth Pro Bowl, finished the season with 5,162 passing yards, his third consecutive 5,000-yard season and fourth overall. He is the only player with multiple 5,000-yard passing seasons and owns four of the eight such performances in NFL history.

In his 13th season from Purdue, this is Brees' 19th career Player of the Week Award and third this season (Weeks 4 and 10).

Hardy had a franchise-record four sacks and six tackles in the Panthers' 21-20 win at Atlanta. With the victory, the Panthers clinched the NFC South division title and a first-round bye.

He finished the season with 15 sacks, tied for the most in team history (KEVIN GREENE, 1998).

In the final two games of the season, Hardy had seven sacks. He is the first player to enter the postseason with consecutive three-sack performances in the team's final two games.

Hardy, who was selected to his first Pro Bowl, was part of a defensive unit that had a franchise-record nine sacks in the game. The Panthers finished the season with 60 sacks, tied for the most in a season in team history (1996).

In his fourth year from Mississippi, this is Hardy's second career Player of the Week Award (Week 3, 2013).

The Panthers have won five Defensive Player of the Week Awards this season, the most in a season in franchise history. In addition to Hardy's two, linebackers LUKE KUECHLY (two) and THOMAS DAVIS have been honored.

Hardy is the fourth player in team history to be named Defensive Player of the Week multiple times. He joins Kuechly (three), JULIUS PEPPERS (three) and MIKE RUCKER (two).

Dawson kicked three field goals, including the game-winner as time expired, and two PATS in the 49ers' 23-20 win at Arizona. With the win, San Francisco locked up the top Wild Card spot in the NFC.

In the final 1:45 of the game, Dawson converted two field-goal attempts. He tied his career-long with a 56-yard field goal with 1:45 remaining to put San Francisco ahead 20-17. After the Cardinals tied the score, Dawson kicked the game-winner from 40 yards out as time expired to win the contest.

Dawson and DAVID AKERS (Weeks 16 and 17, 2011) are the only players in franchise history to be named Special Teams Player of the Week twice in the same season.

Other nominees for NFC Offensive Player of Week 17 as submitted by NFC clubs:

Minnesota running back MATT ASIATA, who rushed for 115 yards in the Vikings' 14-13 win over Detroit.

San Francisco wide receiver ANQUAN BOLDIN, who had nine catches for 149 yards and a touchdown.

Green Bay wide receiver RANDALL COBB, who had two touchdown catches, including the game-winner, in the Packers' 33-28 win at Chicago.

San Francisco quarterback COLIN KAEPERNICK, who completed 21 of 34 passes (61.8 percent) for 310 yards with two touchdowns and no interceptions for a 111.2 passer rating.

New York Giants wide receiver JERREL JERNIGAN, who had six catches for 90 yards with a touchdown and had a 49-yard touchdown run in the Giants' 20-6 win over Washington.

Philadelphia running back LE SEAN MC COY, who rushed for 131 yards and had a touchdown reception in the Eagles' 24-22 win at Dallas.

Atlanta quarterback MATT RYAN, who completed 28 of 40 passes (70 percent) for 280 yards with two touchdowns and a 95.8 passer rating.

Seattle wide receiver GOLDEN TATE, who had eight catches for 129 yards and a touchdown in the Seahawks' 27-9 win over St. Louis.

Other nominees for NFC Defensive Player of Week 17 as submitted by NFC clubs:

San Francisco linebacker NA VORRO BOWMAN, who had 10 tackles, an interception, a sack, a forced fumble and a fumble recovery.

Philadelphia linebacker MYCHAL KENDRICKS, who had 12 tackles, an interception and a forced fumble.

Seattle linebacker MALCOLM SMITH, who had a 37-yard interception-return touchdown and five tackles.

Other nominees for NFC Special Teams Player of Week 17 as submitted by NFC clubs:

Seattle kicker STEVEN HAUSCHKA, who converted both field-goal attempts and all three PATs.