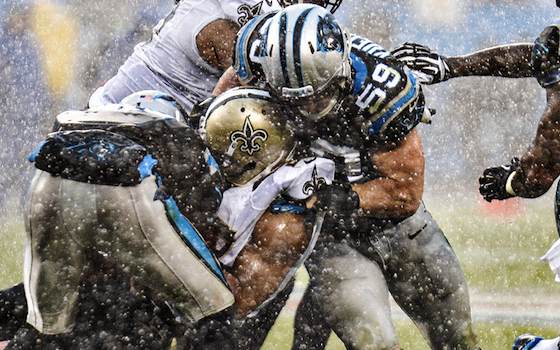 Eagles Running back LeSean McCoy, Panthers linebacker Luke Kuechly and Giants kicker Josh Brown are the NFC Players of the Week for games played the 16th week of the 2013 season

McCoy rushed for 133 yards with two touchdowns and added six catches for 29 yards in the Eagles' 54-11 win over Chicago. The Eagles enter Week 17 with a 9-6 record and will face Dallas with the NFC East title on the line.

He leads the NFL in rushing (1,476) and scrimmage yards (2,012). McCoy can become the first Eagle to win the NFL rushing title since Pro Football Hall of Famer STEVE VAN BUREN in 1949.

McCoy, who averaged 7.4 yards per carry, led a rushing attack which gained 289 yards on the ground. The Eagles lead the NFL this season averaging 161.9 rushing yards per game.

In his fifth season from Pittsburgh, this is McCoy's second career Player of the Week Award (Week 8, 2011).

McCoy, QB NICK FOLES (Weeks 6 and 9) and WR DE SEAN JACKSON (Week 5) are the first QB/RB/WR trio from the same team to all win NFC Offensive Player of the Week in the same season since the 1999 St. Louis Rams (QB KURT WARNER, RB MARSHALL FAULK and WR ISAAC BRUCE).

Kuechly had 24 tackles and an interception in the Panthers' 17-13 win over New Orleans. Carolina improved to 11-4 and clinched a playoff berth. The Panthers can win the NFC South with a win in Week 17.

Since tackles were tracked in 1994, Kuechly's 24 are tied for the most in an NFL game.

During that span, Kuechly and DERRICK BROOKS (September 30, 2001) are the only players to record at least 20 tackles and an interception in a game.

Eleven of Kuechly's 24 tackles were for a loss or within three yards of the line of scrimmage.

He led a defensive unit that limited the Saints to 13 points and 239 passing yards. New Orleans entered the game averaging 25.6 points per game and 307.8 passing yards per game.

In his second year from Boston College, this is Kuechly's third career Player of the Week Award and second this season (Week 10). He was also honored in Week 14, 2012.

Kuechly's three Defensive Player of the Week Awards are tied with JULIUS PEPPERS for the most in franchise history.

Brown converted all three field-goal attempts, including the game-winning 45-yarder in overtime, and both PATs in the Giants' 23-20 overtime win at Detroit.

In his 11th season from Nebraska, this is Brown's fifth career Player of the Week Award and first since 2009 (Week 8 with St. Louis). He also won the award three times with Seattle.

Brown is the seventh kicker in franchise history to named Special Teams Player of the Week and the first since LAWRENCE TYNES in Week 3, 2012.

Other nominees for NFC Offensive Player of Week 16 as submitted by NFC clubs:

Philadelphia quarterback NICK FOLES, who completed 21 of 25 passes (84 percent) for 230 yards with two touchdowns and no interceptions for a 131.7 passer rating.

San Francisco running back FRANK GORE, who rushed for 97 yards and a touchdown in the 49ers' 34-24 win over Atlanta.

New York Giants wide receiver JERREL JERNIGAN, who had six catches for 80 yards and a touchdown.

Dallas running back DE MARCO MURRAY, who rushed for 96 yards with one touchdown and caught the game-winning touchdown in the Cowboys' 24-23 win at Washington.

Atlanta wide receiver RODDY WHITE, who had 12 catches for 141 yards and a touchdown.

Other nominees for NFC Defensive Player of Week 16 as submitted by NFC clubs:

Arizona defensive end CALAIS CAMPBELL, who had two sacks and four tackles in the Cardinals' 17-10 win at Seattle.

Carolina linebacker THOMAS DAVIS, who had 14 tackles and an interception.

New York Giants safety WILL HILL, who had nine tackles and a 38-yard interception-return touchdown.

St. Louis defensive end ROBERT QUINN, who had three sacks and six tackles in the Rams' 23-13 win over Tampa Bay.

Other nominees for NFC Special Teams Player of Week 16 as submitted by NFC clubs:

Carolina punter BRAD NORTMAN, who punted eight times for a 50.8-yard average with a net average of 47 yards.