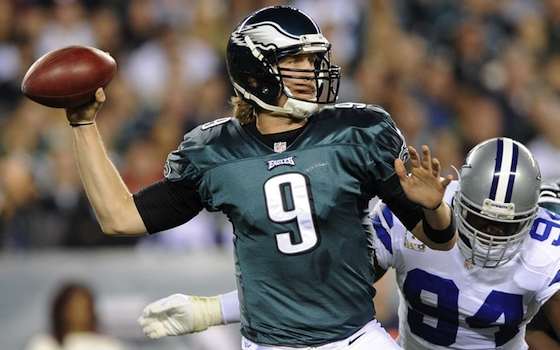 With the NFC East title at stake, the Philadelphia Eagles scored a TD late in the fourth quarter and intercepted Kyle Orton's pass with less than two minutes left for a 24-22 victory over the Dallas Cowboys

With 1:43 remaining in the fourth quarter, Boykin snared a pass intended for wide receiver Miles Austin for his sixth interception of the season that secured the victory for the Eagles, who ended their season with a 10-6 mark after a 3-5 start.

With the win, Chip Kelly became the first rookie head coach in Eagles history to win the division in his first year on the job.

Nick Foles finished the game 17-for-26 for 263 yards and two touchdowns, erasing the memory of his 80-yard performance against the Cowboys in their last meeting.

LeSean McCoy rushed for 131 yards on 27 carries to bag the NFL rushing title, the first time an Eagle has done that since Steve Van Buren captured the rushing title in 1949.

In the second quarter, McCoy set a new franchise record for most rushing yards in a season with 1,607, breaking Wilbert Montgomery's mark of 1,512 set in 1979.

"With the stats and the record, none of that stuff means anything if we don't win today. That was the most important thing," McCoy said.

Orton completed 30 of 46 passes for 358 yards and two touchdowns but he had two interceptions for the Cowboys, who failed to clinch a playoff spot in their last game of the regular season for the third straight year.

Jason Witten tried to keep the Cowboys in the game, tallying a season-high 12 catches for 135 yards but his efforts weren't enough to overcome the Eagles' offense.

The Eagles raced to a 10-0 lead behind Foles' touchdown pass to McCoy but Orton replied with a 17-yard scoring pass to Gavin Escobar.

Foles tossed his second touchdown pass of the game to Brent Celek to restore a 10-point lead before the Cowboys closed the first half with a 44-yard field goal from Dan Bailey.

In the third, Bailey took the spotlight as he nailed field goals from 43 and 36 yards to bring the Cowboys within 17-16.