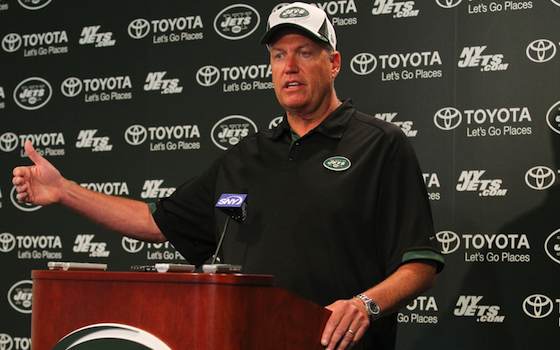 Rex Ryan, out of the playoffs for a third straight season, will return as New York Jets Head Coach in 2014

Despite missing the playoffs for the third straight year under his watch, the New York Jets are keeping Rex Ryan as their head coach for next season.

Ryan will be back despite previous speculation that the coach would be fired after this season.

A well-connected source added that the atmosphere surrounding Ryan's status has turned from negative to positive.

However, it was unclear whether Ryan would coach next season on the last year of his contract or whether the Jets will give him an extension.

According to persons close to Ryan, the head coach would prefer an extension.

Ryan is nearing the completion of his fifth season with the Jets, who finished the NFL 2013 season with an 8-8 record after their upset 20-7 victory over the Miami Dolphins.

Although they have exceeded expectations this season, the Jets have missed the playoffs in each of the past three years under Ryan, who owns a 41-38 career record. New York advanced to the AFC Championship Game in each of its first two seasons with Ryan.

Ryan has received consistent backing from Jets owner Woody Johnson and despite their rocky campaign, he has gotten along just fine with first-year general manager John Idzik.

Aside from Ryan's deal, another issue facing the Jets is that at least a half dozen assistant coaches, including defensive coordinator Dennis Thurman, are working on expiring contracts.