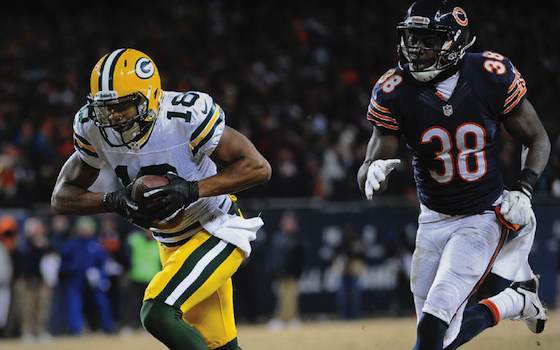 Aaron Rodgers throws 48-yard TD pass to Randall Cobb with 38 seconds left in the game as the Green Bay Packers defeat the Chicago Bears 33-28 to win the NFC North and advance to the playoffs.

Aaron Rodgers's 48 yard touchdown pass to Randall Cobb in the final minute lifted the Green Bay Packers over the Chicago Bears 33-28 at Soldier Field for the NFC North championship.

The touchdown wiped out a one-point Packers deficit with 38 seconds left.

Jarrett Boykin picked up a loose ball and headed 15 yards to the end zone for a 10-7 Packers lead.

But another Forte touchdown and extra point by Gould gave the Bears a 21-20 lead in the third quarter.

Chicago's Brandon Marshall spun away from Tramon Williams in the end zone on the first play of the fourth quarter to make it 28-20.

But the Packers answered with Eddie Lacy's touchdown drive to make it 28-27.

The Packers (8-7-1) earned their third straight division title and fifth postseason appearance in a row. The loss kept the Bears (8-8) out of the playoffs for the sixth time in seven years.

Matt Forte ran for 110 yards and two scores for the Bears. He also had 47 yards receiving with a touchdown catch.