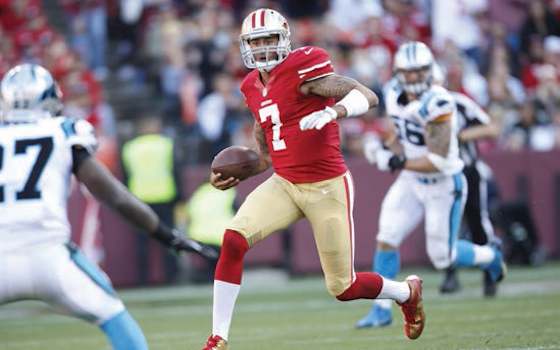 The San Francisco 49ers return to the Divisional Round for the third consecutive season under head coach Jim Harbaugh as they travel to Charlotte to face the Carolina Panthers. The two teams faced each other in Week 10, with Carolina edging the 49ers, 10-9, in a defensive struggle at Candlestick Park. This marks the first postseason matchup between the two teams.

The 49ers defeated the Packers, 23-20, in the Wild Card Round at Green Bay to advance to the NFL's Divisional Playoff Round. The 49ers offense was led by QB Colin Kaepernick, who threw for 227 yards and 1 TD. He also recorded a game-high 98 rushing yards on 7 carries. WR Michael Crabtree had 8 receptions for a postseason career-high 125 yards, and TE Vernon Davis hauled in his 6th career postseason TD on a 28-yard pass from Kaepernick. Phil Dawson kicked three field goals, including the game-winner as time expired.

"It was amazing to get that win," says Kaepernick, who improved to 3-1 in his postseason career. "We came back, fought and played hard."

The Panthers tied a franchise record with 12 wins and won the division for the fourth time in team history.

After falling to 1-3 with a 22-6 loss at Arizona, the Panthers were in an uphill climb throughout the regular season that did not culminate until a 21-20 victory over Atlanta in the final week of the season to win the NFC South.

"We would win but never gained any ground because the teams we were competing against for a playoff spot would win every week as well," says Rivera.

The Panthers never wilted, winning 11 of their last 12 games and now have a new challenge since most of the players on their roster have not experienced postseason play as Carolina makes its first playoff appearance since 2008.

"This is going to be a new venture for me and I'm going to try and make the most of it," says Panthers' quarterback Cam Newton, who is making his postseason debut. "You have to play each and every play like it's your last because it may be."

Carolina ranked second in the NFL in points allowed (241), total defense (301.3 yards per game) and rushing defense (86.9). Kuechly and Thomas Davis were the only linebacker teammates to each record at least 120 tackles, two sacks and two interceptions. Kuechly led the Panthers in tackles with 176. Davis was second to Kuechly in tackles with a career-high 151 while Hardy and Johnson anchored a pass rush that led the NFL with 60 sacks. Hardy's 15 sacks tied Kevin Greene for the single-season high in team history while Johnson finished with 11 to give him four straight seasons with nine or more.

"This is my first time in the playoffs and it's exciting," says Hardy. "I can't wait to see what's next. I want to enjoy it."

Cam Newton, in his third NFL season, is coming off his best quarterback rating while rushing for 585 yards as well. With a career high 24 TD passes and just 13 interceptions, Newton proved the fulcrum of the offense as the Panthers proved steady and efficient with a nearly four minute advantage in time of possession this season.

The Panthers ranked second in the NFL in drives covering five minutes or more and finished tied for seventh in drives of 10 plays of more while ranking fourth in third-down efficiency. Versatility has been the trademark of the Carolina offense as six different players had at least 26 receptions, including tight end Greg Olsen with team bests for catches (73), yards (816), and touchdowns (six). Close behind was Steve Smith, who missed the last seven quarters of the season with a knee injury, with 64 receptions, 745 yards and four scores. The running game was also by committee as DeAngelo Williams (843), Newton (585), and fullback Mike Tolbert (361) each had over 350 yards on the ground. 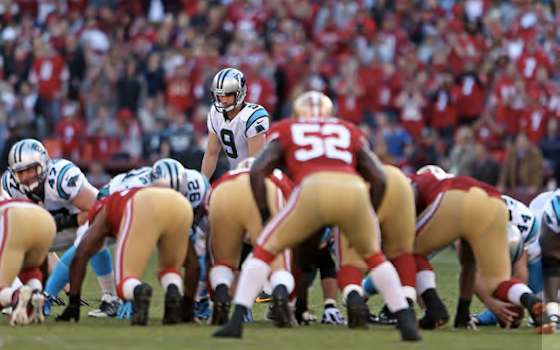 In that game, Carolina limited San Francisco to 151 total yards and kicker Graham Gano kicked a 53-yard field goal in the fourth quarter to give the Panthers a 10-9 victory over the 49ers. 49ers quarterback Colin Kaepernick was 11 of 22 for a season-low 91 yards with an interception and was sacked six times while rushing for a meager 16 yards.

The 49ers opened the game with a nine-play, 46-yard drive that ended with a 53-yard Phil Dawson field goal to give the 49ers a 3-0 lead. Dawson added two more field goals in the first half from 43 and 25 yards out before Carolina scored.

The game's lone touchdown came from Panthers running back DeAngelo Williams who slipped away from two defenders for a 27-yard score to cut the San Francisco lead to 9-7 late in the second quarter. The second half scoring was limited to Gano, who converted a 53-yard field goal with slightly over 10 minutes remaining in the game to give the Panthers the lead, 10-9. Only 1:02 remained when the 49ers took over on their final possession. 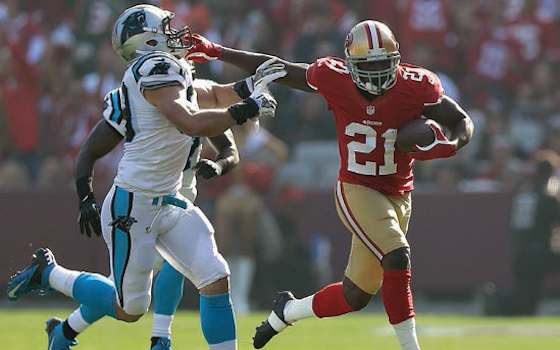 Tough game to pick -- the hardest to pick of all the Divisional playoff games this weekend.

Since their Week 10 encounter, the 49ers have gotten better.

The 49ers offense didn't play very well the last time these 2 teams met as the Panthers defense limited the 49ers to field goals.

Crabtree bolsters the 49ers offense as evidenced by his performance last week as he led the 49ers with eight catches for 125 yards against the Packers. 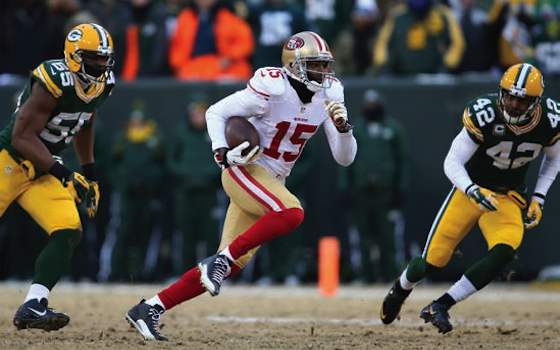 Indeed, the combination of San Francisco's strong defense and the offense's ability to run the ball and control the game makes them a team built to win in the playoff games. After all, Frank Gore is still an effective rusher, Kaepernick is a dual threat and Crabtree makes the 49ers' passing game all that more effective.

But the Panthers are a team built to win in the playoff games as well with a slight edge over the 49ers in the skill positions.

This time, the 49ers will need to score touchdowns instead of field goals to win. The 49ers offense will be better this time around, but the Panther's defense will still limit their point production.

The oddsmakers are favoring the 49ers which is quite rare for a road team in the divisional round. Still, I expect the Cam Newton to make the big plays and the Panthers to rise to the occasion.