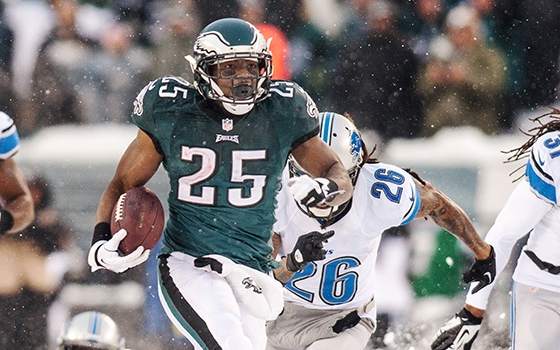 The Saints clinched their playoff berth with a 42-17 win over Tampa Bay in Week 17.

Pro Bowl quarterback Drew Brees threw for 381 yards and four touchdowns in the win and surpassed the 5,000-yard mark (5,162) for the fourth time in his career. Tight end Jimmy Graham finished the season with 86 catches for 1,215 yards and 16 touchdowns, becoming the first tight end in NFL history to record at least 1,200 yards and 10 touchdowns in two different seasons.

"We are good enough to do whatever we set out to do," says Brees about the team's playoff chances. "We took a great step in the right direction with this game to get ready for this playoff run."

Playing a win-and-in game for the NFC East title in Week 17, the Eagles defeated Dallas 24-22 to clinch the NFC East Division Crown and the No. 3 seed in the NFC playoffs.

CB Brandon Boykin intercepted a QB Kyle Orton pass with under two minutes left in regulation to lock up the Eagles win.

Running back LE SEAN MC COY won the rushing title (1,607 yards) and quarterback NICK FOLES was the passing leader (119.2 passer rating). Wide receiver DE SEAN JACKSON had 1,332 receiving yards this season and the Eagles became the first team ever to have a quarterback with a 100+ rating, a 1,500-yard rusher and a 1,300-yard receiver.

"It's a great feeling," says Jackson about returning to the playoffs. "Our fans are going to go wild. It's a great opportunity to bring the playoffs to Philadelphia on Saturday. We just need to have a great week of practice and get ready for a good team coming in here."

The Eagles and Saints have met 28 times in the history of the two franchises, with the Eagles holding a 16-12 series advantage, and have faced off twice in the playoffs, with each team having won one game. Last week,

Can The Eagles Repeat Their Regular Season Magic?

Eagles quarterback Nick Foles makes his playoff debut in this NFC Wild Card Matchup. Foles led the NFL this regular season with a 119.2 passer rating, the third-best mark in a season in NFL history.

Philadelphia running back LeSean McCoy led the NFL with a franchise-record 1,607 yards, becoming the first Eagle to lead the NFL in rushing since Pro Football Hall of Famer Steve Van Buren in 1949.

Despite the extremely cold Northeast weather this should be a high-scoring game.

After all, the Eagles ranked second in the NFL in total offense, while the Saints ranked fourth during the regular season. Plus, the Saints sport the NFL's 4th best defense this season while the Eagles' defense is ranked near the bottom at 29th.

If this game was at New Orleans, this would be a no-brainer as the Saints are undefeated at home this season.

But, it's in Philadelphia where the Eagles have won their last 4, including decisive cold-weather wins against the Lions (34-20) and the Bears (54-11). The Saints were 3-5 on the road this season and are 0-3 in playoff road games under head coach Sean Payton and quarterback Drew Brees.

It will be difficult for Foles to live up to his outstanding regular season stats, but at the same time the conditions are not conducive to the Saints' passing attack. The difference in this game will be the Eagles running game lead by LeSean McCoy

Expect the Eagles to grind it out and beat the Saints, 34-17.