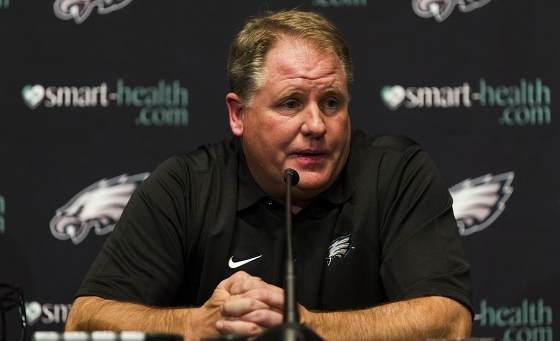 "I understand you have to ask the question but I'm not involved in any jobs. I'm the coach of the Philadelphia Eagles," Kelly said.

Kelly was similarly linked to the vacant USC job earlier this season. "I really don't know," Kelly said. "I haven't talked to anybody. It's just speculation. I haven't spoken to anybody."

It was reported that Texas athletic director Steve Patterson has an "A-list" of coaches he would consider to replace Mack Brown.

Harbaugh declined comment last week when asked about the reports, saying he doesn't "ever talk about any jobs other than the one I have," while NFL.com reported that a source close to Tomlin called the coach's inclusion on Texas' wish list "absurd."

Kelly was the coach at Oregon for four seasons, compiling a 46-7 record. He turned down an offer to coach the Tampa Bay Buccaneers in 2012 but accepted the Eagles' job in January, replacing Andy Reid.