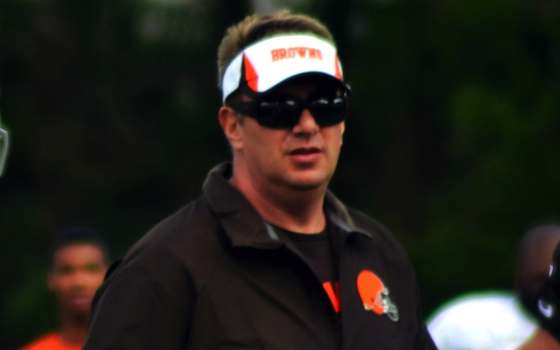 The Cleveland Browns have dismissed head coach Rob Chudzinski after just one year on the job, saying "the team took a concerning step backward in the second half of the year".

"We appreciate Chud's passion for the Browns, and we have great respect for him both personally and professionally," the Browns said in a statement.

"We needed to see progress with this football team. We needed to see development and improvement as the season evolved and, unfortunately, we took a concerning step backward in the second half of the year," the team added.

In explaining their move, the Browns said "fans deserve to see a consistently competitive team", adding there's an urgency for success to meet their high standards.

After a promising start with a 3-2 record, the Browns lost 10 of their last 11 games, including seven straight losses to end the season with a 4-12 mark.

"When we believed we were not positioned to achieve significant progress in 2014, we knew we had to admit that a change was needed, and move forward," the team added.

The announcement happened about five hours after the Browns lost to the Pittsburgh Steelers, 20-7, Sunday.

The decision came after Chudzinski met with Browns CEO Joe Banner and owner Jimmy Haslam. During the meeting, a source said Chudzinski was given an opportunity to plead his case.

Aside from Chudzinski, who has three years left on his contract, his two coordinators -- Norv Turner and Ray Horton - are also expected to be relieved of their positions.

According to sources, the Browns are looking at several candidates, including Patriots offensive coordinator Josh McDaniels and Penn State's Bill O'Brien, to replace Chudzinski.