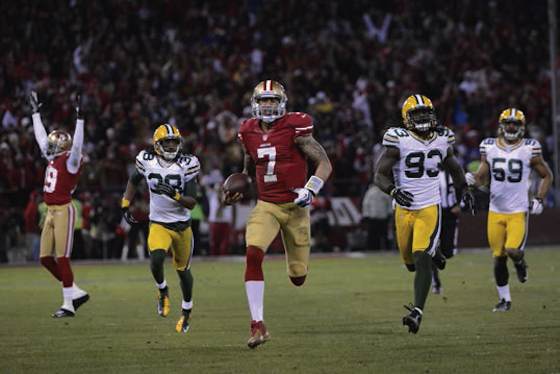 For the fourth time since the start of the 2012 season, the 49ers and Packers will meet. This time, the San Francisco 49ers travel to Lambeau Field to take on the Green Bay Packers in the NFC Wild Card round of the 2013 NFL Playoffs

San Francisco has won all three previous meetings, including last year's Divisional Playoff (45-31) when quarterback Colin Kaepernick rushed for 181 yards with two touchdowns and passed for 263 yards with two TDs. The two teams faced each other in Week 1 this season, with San Francisco winning, 34-28, at Candlestick Park. This marks the seventh postseason matchup between the 49ers and Packers, with Green Bay holding a 4-2 edge in the all-time series.

The 49ers enter the playoffs having won six games in a row.

The 49ers finished out the 2013 regular season by defeating the Arizona Cardinals, to claim the 5th seed in the playoffs. The 49ers were led by QB Colin Kaepernick, who completed 21-34 passing atts. for 310 yards, 2 TDs and a passer rating over 100.0 for the third consecutive week. WR Anquan Boldin had a team-high 9 receptions for 149 yards and a TD, while TE Vernon Davis added a rec. TD of his own.

On defense, the Niners were led by Pro-Bowl LB NaVorro Bowman who recorded an INT for the second-consecutive game, 1 FF, 1 FR and 1.0 sack on the day. His INT led to 7 points, which gave the 49ers 129 points off of turnovers for the season. That marks the third highest total by the team since 1986.

The Packers advanced to the postseason by defeating Chicago 33-28 in Week 17 to claim the NFC North division title.

Rodgers enters the playoffs with a career 103.6 postseason passer rating, the third-best mark in NFL history. Rodgers has completed 193 of 292 passes for a 66.1 completion percentage, the fifth-best mark in NFL Playoff History.

"We're in the playoffs," says Rodgers. "That's the important thing. I think the NFC is wide open."

Aaron Rodgers is back, the game is at Lambeau Field and it's going to be viciously cold.

Rodgers shook off the rust to lead the Packers over the Bears last week. Yes, the 49ers have a great defense. Yes, they will slow down Rodgers. But Rodgers will get enough points on the board for a Packer's victory. 49ers QB Colin Kaepernick, on the other hand, will not be able to outscore Rodgers and the Packers in near-zero degree weather.