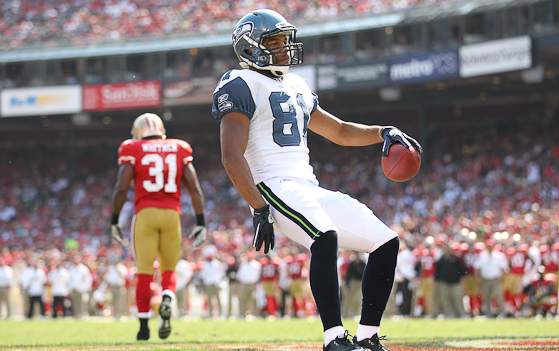 In the absence of injured Percy Harvin, the Seahawks receivers get a little cranky when they hear they "aren't worth squat." How, they ask, did Seahawks get this far?

As with the most beautiful girl in class whose attention never comes your way, the Seahawks can only imagine what it would be like to hang with Percy Harvin for an entire game. Unrequited affection is an awkward thing, and not just for the involved. Imagine those who are second choice. Ask Golden Tate.

"We hear it all the time that we're not worth squat," he said this week. "But at the end of the day, we make the plays that we need to make to help us win. We're sitting 14-3 right now, playing in the NFC Championship."

Hard to argue the point. Just as it is hard to argue the point that coach Pete Carroll operated most of the season with receivers who were supposed to be the 3-4-5 pass catchers on opening day. But the nominal No. 1, Harvin, played parts of two games, and No. 2, Sidney Rice, went down in the eighth week with a torn ACL, after a modest half-season of 16 catches, and won't play until next year.

The Seahawks will get no pity from the New England Patriots, who lost both of their premier tight ends, Aaron Hernandez (murder charge) and Rob Gronkowski (torn ACL), yet are in the AFC title game against Denver Sunday. Nor will the Seahawks get pity from the San Francisco 49ers, whom they play Sunday for the NFC title, because . . . well, they're the 49ers, demon spawn incapable of mercy, or however the script reads for this little psycho-drama.

But Tate is not in pursuit of pity. However, a little respect wouldn't hurt. Then again, if somehow the Seahawks received the respect they all believed they were due, the entire emotional architecture of the team would collapse.

Tate echoed Carroll's season-long contention that the below-average numbers are a function of offensive emphasis, not lack of talent among the surviving members.

"I'm around these guys every single day," Tate said. "I see the plays that they make. I honestly feel like if any of our receivers go somewhere else, (they would) catch 90 balls and be well over 1,000 yards. But that's not how this offense works.

"The good thing about it is we're unselfish players. We want to win. So we just do our jobs. We take a lot of pride in blocking for Marshawn (Lynch) and (Robert) Turbin. When the big plays are called, I feel like more times than not, we're going to come up with the big ball."

These guys do what they can. According to Pro Football Focus, Tate leads the NFL in forcing missed tackles after catch (21 whiffs) and Baldwin's yards out of the slot position are seventh-most in the league. And Kearse, the tallest, is the go-to guy on the deep ball.

Lately, the trio hasn't been helped by the fact that quarterback Russell Wilson has forced a few balls and has been less accurate. But it would be easier to get a bishop to kick out a stained-glass window than to get the receivers to say anything bad about Wilson.

"We have full confidence in Russell," Kearse said this week. "Sometimes it's us (on the misfires), sometimes it's him.

"You know that saying you hear a lot from players about practice, that some guy is first one in, last one out? I don't know about other guys, but Russell lives it."

Kearse made the point by sharing with me a literal glimpse of Wilson's work ethic. He took out his smart phone and flashed the group text Wilson shares weekly with receivers after he has broken down video of the next opponent's defense. Names, stats, formations, tendencies.

No, I don't remember anything strategic. But I saw the big picture: Wilson preps his receivers before they do their own video study, so they can see examples of what they have been texted. A small thing, but if it means gaining a half-step advantage on a defender for that rare moment when the ball is coming their way, it's gold.

Now that defenses dedicate a "spy" for Wilson, and now that pass rushers are under orders to keep him in the pocket, his effectiveness as a runner is diminished. The read-option keeper is so 2012. And Wilson does not figure to surprise a 49ers defense playing him for the fifth time.

So Wilson and Nos. 3, 4 and 5 have no choice Sunday but to be disciplined, efficient, precise and all those other adjectives down the ladder from "spectacular." The pretty girl is not here, never really was, so we know with whom they must dance.