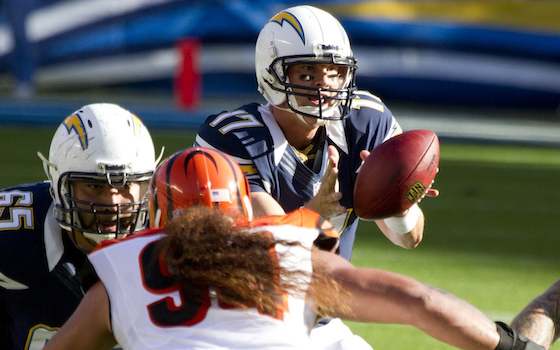 The AFC North Division Champion Cincinnati Bengals (11-5) host the San Diego Chargers (9-7) in an AFC Wild Card Playoff matchup. Cincinnati is 8-0 at home this season and are looking to go deep into the playoffs all the way to the Super Bowl

The Bengals believe they've been steadily getting better ever since 2011, when the team was rebuilt following a poor 2010, and continuing to improve is the only way to advance. Though they are one of only five teams to make the postseason each of the last three years, they lost in the first round in 2011 and 2012, both times as a Wild Card team against the Houston Texans on the road.

Head coach Marvin Lewis has led the Bengals to the playoffs for the third consecutive season and the team's first division title since 2009. Cincinnati had two Pro Bowl selections, one on each side of the ball: WR A.J. GREEN and LB VONTAZE BURFICT.

"We're playing with a lot of confidence right now," says Bengals quarterback ANDY DALTON. "For us to have a home playoff game, it'll be a great environment. We're ready for the playoffs to start."

Now the Bengals have home field advantage and are undefeated at home this season.

"This is the best we've ever felt going into the postseason," said G Andrew Whitworth, major team leader and spokesman. "You can see it in our record -- 9-7 two years ago, then 10-6, now 11-5. There's no reason for us not to have confidence in any situation. We've been in just about every situation and handled it."

The Chargers, led by Pro Bowl quarterback Philip Rivers, won their final four games and earned a playoff berth in Week 17 with a 27-24 overtime win over Kansas City combined with losses by Miami and Baltimore. Rivers finished the season ranked second in the AFC with a 105.5 passer rating and led the league with a 69.5 completion percentage.

"It feels like this season is meant to be special," says safety ERIC WEDDLE. "We're in the playoffs and no one really thought that could happen."

Last week, the Bengals defeated the Ravens 34-17. The Bengals had their share of early problems, but wound up with their largest-ever winning margin against Baltimore.

Already having clinched the AFC North Division title, the Bengals were in search of a No. 2 AFC playoff seed but had to settle for the third spot when New England also won. The Ravens, defending Super Bowl champs, were eliminated from playoff contention, not getting the help they needed in other games to combat their loss.

The Ravens had chances for a big early lead, following two INTs, but the Bengals defense twice held for FGs and limited the deficit to 6-0. The Bengals went up 17-6 at halftime, later were tied at 17-17 and ended the game with a 17-0 run.

The Chargers qualified for the playoffs in nearly-impossible fashion as they won their final four games of the regular-season and five of their last six. The Chargers capped off the regular season with a three-point overtime win over the Kansas City Chiefs. The Chargers outscored the Chiefs 10-0 in the fourth quarter to send the regular-season finale to overtime and then drove 16 plays on the opening possession of overtime for a field goal and a 27-24 lead. The Chargers' defense allowed Kansas City to cross midfield but then settled down with nonstop pressure that led to the game ending on downs.

The Bengals finished 10th in the NFL in net offense and tied for sixth in scoring. On defense, the numbers were even better. Cincinnati finished the season third in total defense (305.5 yards per game) and tied for fifth in fewest points allowed.

The Chargers are lead by their outstanding quarterback Philip Rivers.

Rivers continued to build upon his amazing month of December career. He raised his career record in December to 30-6 by going 4-1 this season. Since 2006, it's the most wins in the NFL by any starting quarterback in the month. Rivers ranks third all-time in the month of December with a passer rating of 98.9 that is bettered only by Green Bay's Aaron Rodgers (104.8) and Denver's Peyton Manning (100.7). In 37 career December games, Rivers has completed 682 of 1,087 (62.7 pct.) for 8,337 yards with 66 touchdowns and just 20 interceptions.

The Chargers return to Cincinnati for a playoff game for just the second time in team history and for the first time since the infamous "Freezer Bowl" in the 1981 AFC Championship Game. That game saw temperatures dip as low as nine degrees below zero with a wind chill of minus 59. The weather will be much more agreeable as the forecast is calling for temperatures in the mid-40s with the possibility of rain showers.

The Chargers are better than the team Cincinnati defeated 17-10 on Dec. 1 at Qualcomm Stadium. After that loss, the Chargers closed out the regular season with four straight wins, including wins over Denver and Kansas City.

The game will come down who is the better quarterback -- Andy Dalton or Philip Rivers.

The Chargers are on a roll -- and so is Rivers in his usual December fashion. Dalton will have a good game, but somehow Rivers will lead the Chargers on to the next round.

Expect the Chargers to beat the Bengals, 24-21.