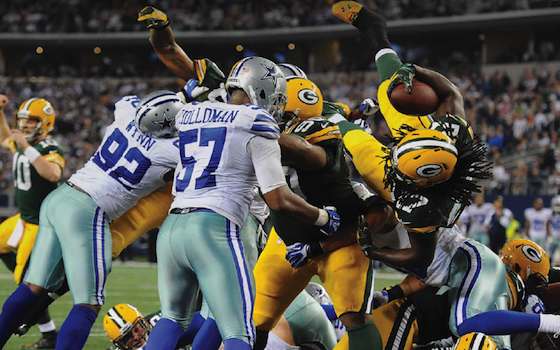 "It's the fourth quarter of the season and we have to beat Pittsburgh next," says head coach Mike McCarthy of the Green Bay Packers, who rallied from a 23-point halftime deficit to defeat Dallas 37-36 and are now in control of their playoff destiny in the NFC North. "We can't worry about what's going on around us. We can't control it. We just have to get ready to play."

So far, only four playoff spots have been clinched -- Denver, Indianapolis, Kansas City and Seattle. With two weeks left, there are still 19 teams in contention for a trip to Super Bowl XLVIII.

Only one division -- AFC South (Indianapolis) -- has been clinched. The remaining seven division winners are still to be decided.

"This is an amazing league," says Baltimore Ravens head coach John Harbaugh, whose team is in control in the AFC North. "Everybody is so close and that's what makes it great."

There will be 15 games on Sunday and Week 16 will conclude on Monday night in a rematch of last season's NFC Championship Game between the San Francisco 49ers and Atlanta Falcons (ESPN, 8:40 PM ET). The game also marks the final regular-season game at Candlestick Park.

Both teams enter the contest with 10-4 records and each is in control for the division title and a first-round bye.

"The next two games as far as I'm concerned are playoff games," says Carolina head coach RON RIVERA. "There's a lot of importance to this next game against New Orleans. This is about as big as it gets."

Carolina has won nine of its past 10 games with the only loss coming at the hands of the Saints. In last week's 30-20 win over the New York Jets, Panthers running back DE ANGELO WILLIAMS became the first player in franchise history with at least 80 rushing (81) and 80 receiving (87) yards in the same game. Williams had a 72-yard touchdown catch from quarterback CAM NEWTON, who posted a 118.9 passer rating in the contest. Cornerback CAPTAIN MUNNERLYN had two sacks and a 41-yard interception-return touchdown, his fourth INT-TD in the past two seasons, the most in the NFL.

[ Check Out: Panthers and Saints Face Off in NFC South Matchup ]

The Seahawks have clinched a playoff spot and the Cardinals find themselves in the thick of the postseason race.

Arizona head coach Bruce Arians -- who was the 2012 AP NFL Coach of the Year with Indianapolis -- has guided the Cardinals to nine wins in his first season as the helm. In franchise history, only NORM BARRY in 1925 had more wins in his first season as the team's head coach. Last week, Arizona won 37-34 in overtime at Tennessee. Cardinals cornerback ANTOINE CASON had an interception-return touchdown and set up JAY FEELY's 41-yard game-winning field goal with an interception in overtime. Offensively, rookie running back ANDRE ELLINGTON had 87 receiving yards and 71 rushing yards, joining Pro Football Hall of Famer OLLIE MATSON (October 26, 1952) as the only rookies in team history with at least 80 receiving yards and 70 rushing yards in a game.

With a win -- or a San Francisco loss -- Seattle will lock up the No. 1 seed in the NFC and home-field advantage throughout the playoffs. Last week, the Seahawks recorded five interceptions in a 23-0 shutout win over the New York Giants at MetLife Stadium, the home of Super Bowl XLVIII. Seattle cornerbacks RICHARD SHERMAN and BYRON MAXWELL each had two interceptions with safety EARL THOMAS contributing one. Quarterback RUSSELL WILSON -- who has never lost at home (14-0) -- notched his 23rd win, the most in the Super Bowl era by a starting quarterback in his first two seasons.

"At this point in the season, it's about making plays and winning games," says Feely. "Nothing else matters. You just have to win."

"We've got 10 wins, and 10 wins is fine," says Brady. "But it hasn't gotten us anything. We haven't qualified for anything. We need to start playing better football and see if we can do better on a more consistent basis."

Baltimore has won four games in a row and is now in control of its destiny in the AFC North.

On Monday night, Justin Tucker kicked six field goals in the Ravens' 18-16 win at Detroit. Tucker sealed the victory with a career-long 61-yard field goal with 38 seconds remaining. That marked the third-longest come-from-behind game-winning field goal in the final minute of the fourth quarter in NFL history.

"We're playing our best football right now and we're going to have to continue to improve with what we have in front of us down the stretch," says Ravens head coach JOHN HARBAUGH.

The Chicago Bears are in control in the NFC North.

With a win and losses by both Detroit and Green Bay, the Bears will clinch the division. Chicago and Green Bay will also meet in Week 17.

Chicago quarterback Jay Cutler returned to the lineup in last week's 38-31 win at Cleveland and threw three touchdown passes -- one each to EARL BENNETT, ALSHON JEFFERY and BRANDON MARSHALL. Jeffery (1,265 yards) and Marshall (1,185) have combined for 2,450 receiving yards, the most by teammates this season. The Bears also got a score on defense as cornerback ZACK BOWMAN returned one of his two interceptions for a touchdown.

Philadelphia is in control in the NFC East. With a win and a Dallas loss in Week 16, the Eagles will clinch the division. Philadelphia and Dallas will also meet in Week 17.

"We've put ourselves in a position to compete for the division in the last two games," says Chicago head coach Marc Trestman. "But we've got to play better to win it."

[ Check Out: Eagles Host Bears with Division Leads on the Line ]