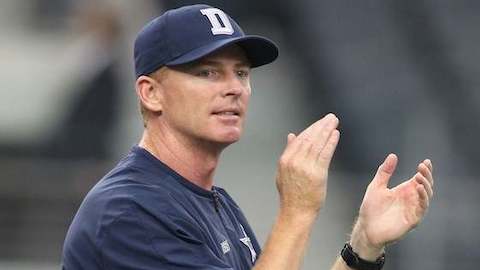 Coach Jason Garrett and his coaching staff may be on the way out if the Dallas Cowboys fail to win the NFC East and reach the playoffs.

ESPN's Ed Werder noted that although owner Jerry Jones doesn't want to fire Garrett, he may be forced to if their playoff woes continue.

Garrett, a former Cowboys backup quarterback, has a 28-26 record through three and a half years and has never made the playoffs.

The Cowboys kept their playoff hopes alive Sunday by rallying to beat the Washington Redskins 24-23 to improve to 8-7.

Tony Romo hit DeMarco Murray with a 10-yard touchdown pass with 1:08 remaining for the win.

Garrett had singled out Romo for wrongly changing a run call into a pass before last week's game-turning interception against the Green Bay Packers, creating tension between the two.

The Cowboys lost despite leading 26-3 at halftime.

Romo has generally been criticized for failing to play the role of clutch quarterback when it counts.

The Cowboys only ticket to the playoffs is by beating the Eagles in a winner-take-all season finale in Week 17, as a wild-card berth is not an option.

The Cowboys defeated the Eagles 17-3 in their previous match up on Oct. 20.

But the Cowboys have lost winner-take-all games to end the past two seasons -- against the New York Giants in 2011 and Redskins in 2012.