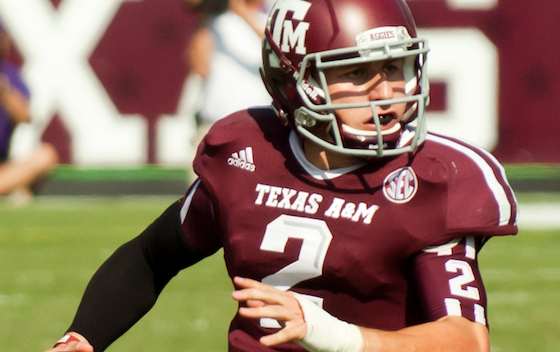 Texas A&M quarterback Johnny Manziel has decided to forego his final two seasons of eligibility and join the 2014 NFL Draft, according to sources.

Manziel, the 2012 Heisman Trophy winner, has already filed the official paperwork declaring himself eligible for the draft Wednesday.

Widely expected as a first-round draft selection, Manziel is coming off his second productive season as the Aggies' starting play-caller.

Manziel threw for 7,820 yards and 63 touchdowns while rushing for 2,169 yards and 30 more scores over his two-year career at Texas A&M.

He became the first freshman in college football history to win the Heisman Trophy in 2012, when he set the SEC single-season total offense record by accounting for 5,116 yards.

According to sources, Manziel has picked Select Sports Group out of Houston to be his contract agency and LRMR, the firm run by LeBron James' business partner Maverick Carter, to do his marketing.

However, it was unclear if Manziel has officially signed with either firm. Once he does sign with an agency, he forfeits his remaining NCAA eligibility.

Texas A&M quarterback Johnny Manziel has officially declared himself eligible for the 2014 NFL Draft. In 2012, Manziel was the first freshman to ever win the Heisman Trophy in 2012