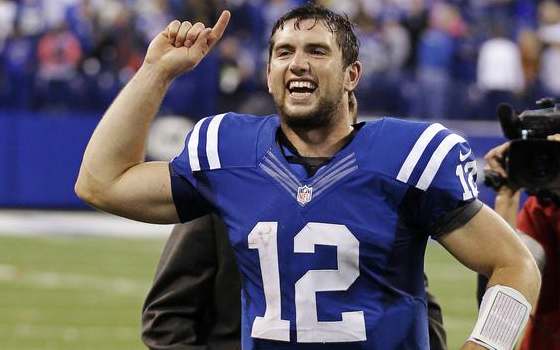 Trailing 38-10 early in the third quarter, Andrew Luck rallied the Colts from the four-TD deficit to push the Indianapolis Colts to a 45-44 comeback victory over the Kansas City Chiefs Saturday at Lucas Oil Stadium.

After doing everything right in the first 32 minutes, the Chiefs would only muster two field goals in the last 28 minutes of the game.

Luck finished 29 of 45 for 443 yards, four TD passes and three interceptions. Luck also recovered a fumble and ran it in for a 4-yard touchdown. T.Y. Hilton finished with 13 receptions for two TDs and a Colts playoff-record 224 receiving yards.

Luck's game-winning TD pass was a 64-yard bomb to Hilton with 4:29 to play. Hilton sliced through and wound up open behind two Chiefs defensive backs. Hilton caught the pass in stride for the eventual game-winning touchdown.

The Chiefs put themselves in position for the victory with 1:55 to play when Alex Smith connected with Dwayne Bowe down the right sideline on fourth-and-11, But, Bowe was unable to get both feet inbounds and was ruled out of bounds.

Luck's first career playoff victory is the second largest come from behind victory in NFL playoff history. The victory sends Indianapolis (12-5) to either Denver or New England next weekend for the divisional round.

Alex Smith was 30 of 46 for a franchise playoff-record 378 yards and four TDs with no interceptions on a day he lost his top two running backs, Jamaal Charles and Knile Davis, and starting receiver Donnie Avery to injuries.

Charles suffered a concussion on opening drive. He got hit hard and stayed down on the field, face first, for a few moments.

Avery left in the third quarter also with a concusssion, though it's unclear when the injury occurred.

Davis injured his left knee after he was hit in the fourth quarter.

Chiefs linebacker Tamba Hali: "Outplayed. It's hard. We're a good team. We play our hearts out, get leads like that. We lost our edge."