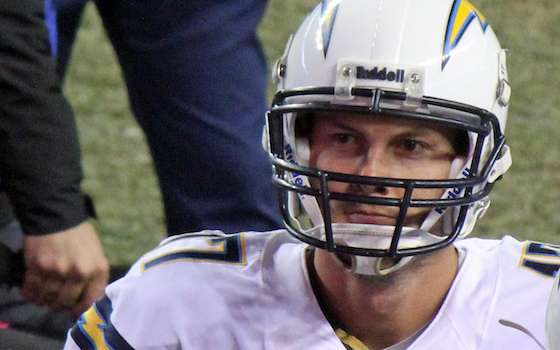 Philip Rivers carried the San Diego Chargers to a 27-10 upset win over the Cincinnati Bengals Sunday at Paul Brown Stadium.

Rivers completed 12 of 16 passes for 128 yards and a touchdown in posting a 118.8 passer rating. Running backs Danny Woodhead and Ronnie Brown each rushed for a touchdown as the Chargers earned a date with the No. 1 seed Denver Broncos in next Sunday's AFC Divisional Round.

The Chargers have now won five in a row. Denver was 1-1 against San Diego in the regular season series. The Broncos and Chargers have never played each other in the postseason.

The Chargers outperformed the Bengals in two key areas.

San Diego racked up a season-high four takeaways with two interceptions and two fumble recoveries, and they rushed for a season-high 196 yards and got touchdown runs from Danny Woodhead (five yards) and Ronnie Brown (58 yards). Brown ran for 77 yards on eight carries, Woodhead tallied 54 yards on 15 carries. Ladarius Green caught three passes for 34 yards and a TD.

Woodhead put the Chargers ahead with a five-yard scoring run in the first period but the Bengals responded with Dalton's four-yard touchdown pass to Jermaine Gresham and a 46-yard field goal from Mike Nugent to give Cincinnati a 10-7 led at the half.

Cincinnati's first six drives of the second half ended with a punt after a third-down sack, a fumble, two interceptions and two on downs. Their seventh ended when the clock expired. In addition to the four takeaways, the Chargers' defense recorded three sacks, five tackles for loss and eight passes defensed.

Andy Dalton completed 29 of 51 passes for 334 yards, 18 more than the Chargers, and a touchdown but doomed the Bengals' chances after throwing three interceptions. Marvin Jones caught eight passes for 130 yards while Giovani Bernard rushed for 45 yards on 12 carries for the AFC North champion Bengals, who ended their season in disappointing fashion as they were beaten at home for the first time this season.