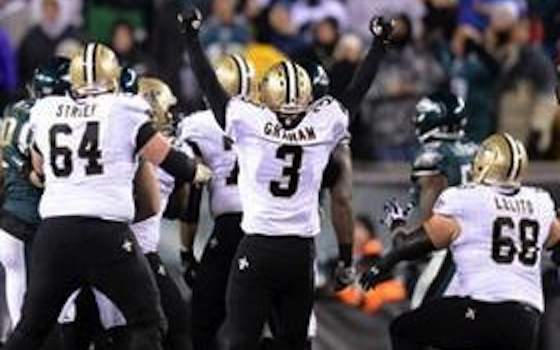 Mark Ingram rushed 18 times for 97 yards and a touchdown to lead the New Orleans Saints to a 26-24 win over the Philadelphia Eagles at Lincoln Financial Field.

Nick Foles hit rookie Zach Ertz for a 3-yard touchdown with 4:54 remaining as the Eagles rallied from a 13-point deficit to take a 24-23 lead in the wild-card round of the NFC playoffs.

With 4:44 left Ingram and rookie Khiry Robinson helped seal the win with a methodical, clock-killing drive. Robinson rushed for 45 yards in his first playoff game.

The Saints (12-5) were without injured running back Pierre Thomas and lost linebacker Parys Haralson late in the second quarter to a chest injury and cornerback Keenan Lewis in the third quarter with a likely concussion.

The Saints ran the ball 36 times compared to only 30 pass plays as the Saints' ground game was good for 185 total rushing yards. The Eagles' ground game, on the other hand, was limited as the Saints defense held McCoy, the NFL's leading rusher, to only 77 yards on 21 carries.

The ground game was particularly important on New Orleans' final game-winning drive. Trailing 24-23 with 4:54 remaining, a 39-yard kickoff return by RB Darren Sproles and a subsequent 15-yard penalty assessed to Philadelphia gave New Orleans field position at the Eagles 48-yard line. The Saints then went on an 11-play drive that featured eight runs and only one pass and chewed up the clock to set up K Shayne Graham's game-winning 32-yard field goal as time expired. In addition to Ingram's total, rookie Khiry Robinson carried eight times for 45 yards and QB Drew Brees converted a pair of third-and-one rushes on the game-winning drive.

Brees completed 20-of-30 passes for 250 yards with a 24-yard scoring strike to WR Lance Moore in the third quarter.

While the efforts and 434 total net yards of the offense were well-documented, the Saints defense, which underwent one of the most significant improvements in NFL history in 2013 enjoyed another strong outing against the Eagles.

The unit surrendered only 256 net yards and stiffened when it had to, holding the Eagles to only seven first half points and allowing them to convert only three-of-12 (25%) third down attempts. DE Cameron Jordan led the defensive effort with 1.5 sacks. ILB David Hawthorne and CB Keenan Lewis tied for the team lead with five solo tackles apiece.

The Saints play the NFC top-seed Seahawks at Seattle next Saturday.