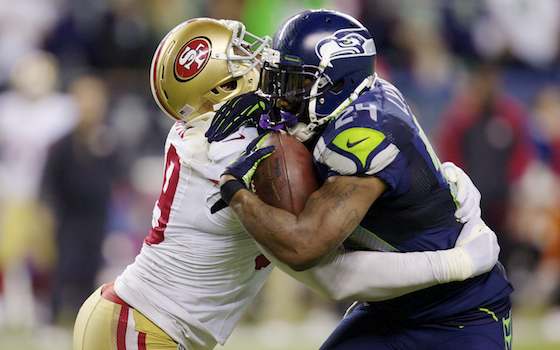 If the Seahawks hadn't allowed a 51-yard run to Frank Gore with four minutes left Dec. 8, they probably would have swept the San Francisco 49ers

The Seahawks beat San Francisco 29-3 at CenturyLink Field Sept. 15 and the 49ers returned the favor, 19-17, at Candlestick Park Dec. 8. The Seahawks had a cmbined point differential of +24, but the difference in total yards was negligible: Seahawks 554, 49ers 525). Seattle won the first game largely by intercepting Colin Kaepernick three times, and the 49ers won the second when Frank Gore&'s 51-yard non-scoring run set up Phil Dawson&'s game-winning field goal. Recaps of the two meetings:

Marshawn Lynch scored on runs of 14 and 2 yards and added a 7-yard touchdown reception in the second half, the Seahawks flustered Kaepernick into the worst passing day of his career, and the Seahawks rolled to a one-sided rout in a game delayed 60 minutes late in the first quarter when thunderstorms blew through the Seattle area.

Lynch amassed 135 total yards, 98 rushing, which compensated for a slow start by quarterback Russell Wilson and the inability of his receivers to get open.

Lynch&'s TD run on the first drive of the second half gave Seattle a 12-0 lead. His TD catch pushed the advantage to 19-3 early in the fourth quarter.

Kaepernick, 13 of 28 for 127 yards, 3 INTs, 20.1 rating, failed to get anything going. He was intercepted in the end zone in the first quarter when Earl Thomas snatched a deflected pass meant for Vernon Davis. That was the only time San Francisco threatened to score a touchdown. Kam Chancellor intercepted Kaepernick in the fourth quarter, which led to Lynch&'s third TD.

Frank Gore&'s out-of-nowhere, 51-yard run with four minutes to play set up Phil Dawson for his fourth field goal, a 22-yarder, that handed Seattle its second loss. The Seahawks (11-2) had their seven-game win streak snapped in their fourth consecutive loss at Candlestick Park.

The Seahawks had an opportunity to wrap up their first division title since 2010, but Gore&'s big sprint, off left guard, to the Seattle 18-yard line with four minutes left, proved the killer. Dawson drilled a 22-yarder seven plays later for the winning points.

The 49ers, unbeaten at Candlestick against the NFC West since losing to Seattle Oct. 26, 2008, led 6-0 after the first quarter, had a 16-14 edge at halftime and fell behind 17-16 in the third quarter. They rallied for their first win over the Seahawks after two consecutive blowout losses at CenturyLink Field.

The Seahawks couldn&'t do much offensively against the NFL&'s third-ranked defense, gaining 264 yards to San Francisco&'s 318. Russell Wilson completed 15 of 25 for 199 yards and a touchdown, but his interception on Seattle&'s final play, when WR Jermaine Kearse fell down on a 70-yard Hail Mary, dropped his passer rating for the game to 81.9.

Marshawn Lynch, who tallied his 10th rushing touchdown in the first half, had 50 yards through the first two quarters but finished with just 72. As a measure of how well the 49ers blanketed receivers, rookie tight end Luke Willson led Seattle in receiving with 70 yards, including his first NFL touchdown.

The Seahawks contained San Francisco QB Colin Kaepernick, who threw for 175 yards, one touchdown and one pick, but Gore ran for 110 yards and WR Anquan Boldin had six catches for 93 yards. In Boldin&'s first meeting with the Seahawks in September, he had one catch for seven yards.

Lynch scored on Seattle&'s first series of the second quarter after Wilson threw 31 yards to tight end Willson and 24 yards to Golden Tate. On Lynch&'s run, Wilson successfully suckered the 49ers with a play fake, leaving a huge running lane open for Lynch.

Dawson gave the 49ers a 9-7 lead with a 52-yard field goal, but the Seahawks were fortunate San Francisco didn&'t come away with a touchdown. Following a Kaepernick 20-yard completion to Boldin, Kaepernick threw a ball to Michael Crabtree along the sideline that should have resulted in a first down at the Seattle five-yard line. But Byron Maxwell got away with pass interference, setting up Dawson&'s third field goal.

Wilson came back with a 39-yard touchdown pass to Willson to give the Seahawks a 14-9 lead. Lynch&'s five-yard run, Wilson&'s eight-yard completion to Doug Baldwin and Robert Turbin&'s eight-yard run highlighted the seven-play, 72-yard drive. The TD catch by Willson was a career first and his longest.

The 49ers scored with six seconds left in the half when Kaepernick threw an eight-yard TD to TE Vernon Davis. Kaepernick&'s 27-yard completion to Boldin to the Seattle 20-yard line set up the score.

After a scoreless third period, the Seahawks took a 17-16 lead with 6:27 left when Steven Hauschka nailed a 31-yard field goal. The score was set up by a 52-yard punt return by Tate to the Niners 27, but were denied the touchdown.

Gore&'s 51-yard run to the Seahawks&' 18 set up Dawson&'s field goal. Out of timeouts with 26 seconds left, the Seahawks went deep with the first play but were picked off.