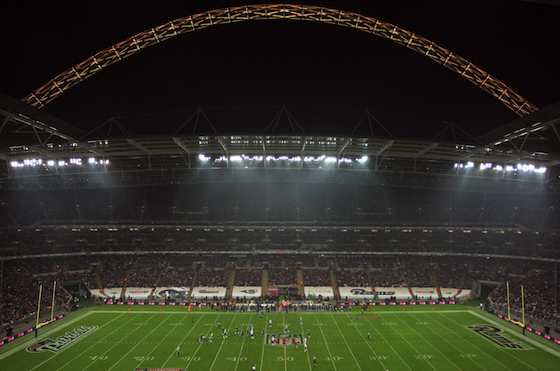 In response to outstanding and growing fan support of football in the United Kingdom, the NFL will take an historic step forward in 2013 by playing two regular-season games in London for the first time.

"Since we started playing regular-season games in London six years ago, we have heard very clearly from our UK fans that they want more football," says NFL Commissioner Roger Goodell. "We are excited to play two games in London and take this next step in the growth of our game. We believe that more football will lead to more fans." The first of the two 2013 games at London's Wembley Stadium will take place on September 29 when the Minnesota Vikings meet the Pittsburgh Steelers.

"This is a unique opportunity for the Vikings organization to highlight our brand on an international level," says Vikings Owner/President Mark Wilf. "Playing in London provides exceptional exposure to the team, as well as Minnesota's impressive business community and tourism industry. We are honored to represent the NFL on a global level, and we look forward to playing in front of our international fan base."

The Steelers, who have won an NFL-best six Super Bowl championships, will play for the first time ever in London. "We are thrilled that our players and Steelers fans around the world will be able to enjoy the atmosphere at historic Wembley Stadium," says Steelers President Art Rooney II. The Jacksonville Jaguars will host the San Francisco 49ers on October 27 in the second 2013 London game. The contest will mark the first in London for the Jaguars, who committed to play one regular-season home game in the UK in 2013, 2014, 2015 and 2016, all at Wembley.

"Everyone associated with the Jacksonville Jaguars is very much looking forward to our four home games in London through 2016, and we're particularly thrilled and honored that our first opponent will be the San Francisco 49ers," says Jaguars Owner SHAD KHAN (left, with Commissioner Goodell). "This is a unique and important opportunity for the Jaguars franchise, as well as for our fans and community. To share this stage in our first year at Wembley with a rising power like the 49ers will bring additional attention and respect to what we're trying to achieve as a franchise. We can't wait to see our global vision for the Jaguars become reality."

San Francisco will make its second appearance in the International Series.

The 49ers hosted the Denver Broncos at Wembley Stadium in 2010, earning a 24-16 victory before a crowd of 83,941. "The 49ers are excited and privileged to once again serve as ambassadors for the NFL and the game of football internationally," says 49ers Chief Executive Officer JED YORK. "Our 2010 experience in London was tremendous. The atmosphere at Wembley Stadium on game day was electric. The ability for us to share 49ers football with our faithful fans internationally is a treat for everyone in our organization."

The International Series began on October 28, 2007, when the New York Giants defeated the Miami Dolphins 13-10 en route to a victory in Super Bowl XLII.

Here's what some of the players and coaches thought about playing in London:

"Preparation was outstanding. It was a regular game week. We had a great couple of days out in Surrey. When we got to London, it was business as usual. It felt like a normal road trip for us."

"I think this experience will serve us well down the road. There are a lot of new players, and it's nice to come together and experience something like this. It's a unique bonding experience for all of us."

"There are 32 teams in the NFL. The Saints and Chargers were the third and fourth teams to represent the NFL in London. That speaks volumes and I am honored to have been there."

"Our experience over here, where we got to spend time together throughout the week, will carry them a long way. They got close. They had fun. They worked and we appreciate the whole experience. It was incredible. Everybody here associated with this game treated us like kings. I would strongly recommend this game to any of the other clubs in the NFL."

"I thought it was an honor to play in Wembley Stadium. I think it was really cool. I loved the fact that the support was strong and seems like the fans are very knowledgeable. It was definitely an exciting atmosphere."

QB Eli Manning, New York Giants "The British fans were great. I hope the NFL continues to play games here. I would recommend playing here to any team. It felt like playing a normal regularseason game, but just in a different country."

"We heard the fans from start to finish. We have gotten a great response from our fans over here. I was on board all along. I felt like the Chicago Bears, since we're one of the founding franchises, should be one of the teams going over and showing our brand of football internationally."

"We've got to get an NFL team over here. The energy was unbelievable. There were a few times when Denver made a lot of good plays, big plays, and the fans stayed with it. The wave, the fans, the flags, it was just a lot of energy."