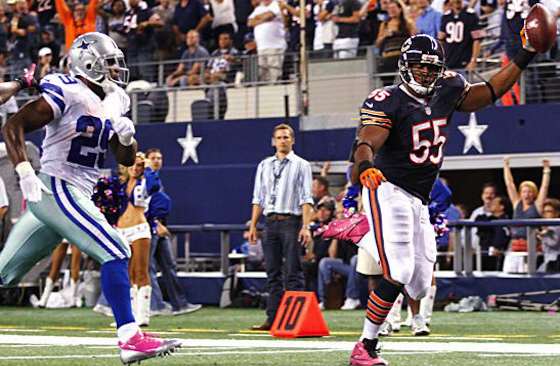 The Chicago Bears, who snagged an NFL-best 24 interceptions in 2012, led the league with eight INT-TDs, tied for the secondmost by a team in a single season in NFL history. Bears linebacker LANCE BRIGGS (bottom left) credited his defense's scoring success to its effort… with a touch of chance.

"Of course, there's a little bit of luck, but a lot of that stuff really comes just from playing hard," says Briggs, who recorded INT-TDs in back-to-back games last year (Weeks 4 and 5). "If I'm not running to the ball when the ball is tipped in Jacksonville, there is no interception. It's about how we play the game. If you play the game hard, there are some opportunities there. Just don't miss the opportunities."

In Weeks 4 and 5, Briggs and cornerback Charles Tillman each had an interception-return touchdown, becoming the first set of teammates to each return an interception for a touchdown in consecutive games. The Bears also became the first team in NFL history to return seven interceptions for touchdowns in the first eight games to start a season.

Most Players To Record INT-Return TD (Since 1970)

NFL teams with the most interception-return TDs in one season