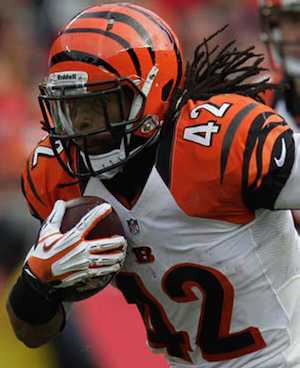 In fourth-and-one situations, the offense or defense must not only overpower its opponent but also outsmart it in order to gain or retain possession. It is an art that must be studied for mastery.

The Cincinnati Bengals in 2012 converted all seven of their fourth-and-one situations, finishing as the only team with a perfect efficiency in the category (minimum four attempts) and tying for the fourth-most such attempts in the NFL.

Bengals head coach Marvin Lewis credits his team's success to its mindset and the addition of running back Ben Jarvus Green-Ellis, who successfully converted all three of his fourth-and-one carries in 2012.

"We were much better on short yardage and goal line," says Lewis. "That mentality was a different mentality. That was something that Green-Ellis felt so good about. That was something he has excelled at. When he came to Cincinnati, it was the one thing he got excited about because he was used to being very good at that in New England. That was his forte."

The teams with the most attempts and the best efficiency on fourth-and-one last season: