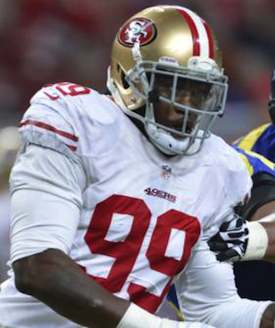 Aldon Smith (33.5) of the San Francisco 49ers, Von Miller (30) of the Denver Broncos and J.J. Watt (26) of the Houston Texans have combined for 89.5 career sacks, the most by any trio from the same draft class in its first two NFL seasons.

With 33.5 sacks, Smith surpassed Pro Football Hall of Famer Reggie White (31) for the most sacks by a player in his first two NFL seasons since the sack became an official statistic in 1982.

"He's got every single pass-rush move you can have," says 49ers offensive tackle JOE STALEY about Smith. "He has everything. I think he's one of the smarter pass rushers, in terms of knowing what the tackle is doing, how to read it and how to take advantage of it."

"He's a good player," says New England Patriots Pro Bowl guard LOGAN MANKINS. "He has a good skill set and is a relentless guy and I think he fits Houston's defense perfectly."

Since entering the league in 2011, Smith, Miller and Watt rank in the top five in sacks among all NFL players.

The players with the most sacks since 2011: 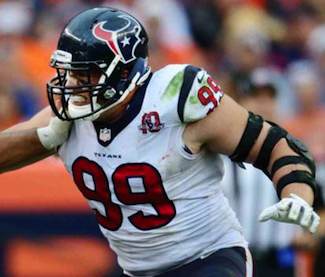 When a defense controls the line of scrimmage, the opposing team's offense is affected as timing and rhythm are disrupted.

Houston Texans Pro Bowl defensive end J.J. Watt (left) caused havoc in the backfield as he led the NFL in sacks (20.5) and tackles for a loss (39) en route to being named the NFL Defensive Player of the Year by The Associated Press. Texans head coach Gary Kubiak knows it is special to have a defensive player who can disrupt both the rushing and passing game like Watt, the first player to record at least 15 sacks (20.5) and 15 passes defensed (16) in a season.

"He's just a great player," Kubiak says of Watt. "The thing that's amazing is usually guys are great pass rushers or some guy is a big run stuffer inside; guys have a specialty. But here's a guy playing a five-technique, basically, in a 3-4 defense, and this guy is exceptional rushing the passer. He plays the run as well as anybody I've been around."

The players to lead the NFL last year in tackles for a loss and sacks:

Most Tackles For A Loss