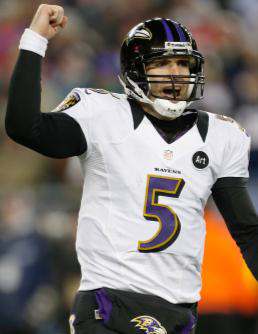 A strong-armed quarterback with an even-keeled personality on and off the field, Joe Flacco was pivotal in the 2012 postseason as he led the Ravens to victory in Super Bowl XLVII and was named Super Bowl MVP.

"Joe is calm and cool," says former Ravens and current Houston Texans safety ED REED. "We all get shaken at some times, that's football, but Joe is going to always come back. He is a fighter. He is a guy that you want taking that snap at the end of the game leading your team to go into that final drive to win the game."

The quarterbacks with the most playoff wins in the first five seasons of a career in NFL history:

In the 2012 playoffs, Flacco passed for 1,140 yards with 11 touchdowns and no interceptions for a 117.2 passer rating. His 11 postseason touchdown passes tied Pro Football Hall of Famer JOE MONTANA (1989) and KURT WARNER (2008) for the most touchdowns passes in a single postseason.

"He is a great quarterback," says New England Patriots All-Star defensive tackle VINCE WILFORK. "He puts his team in good situations. He doesn't turn the ball over much. He is a very physically and mentally tough football player. He is definitely one of the tougher quarterbacks in this league."

Flacco's toughness was on full display during the 2012 postseason.

After a home win against Indianapolis in the Wild Card round, he led the Ravens to two road playoff wins (at Denver and at New England) en route to Super Bowl XLVII in New Orleans. With the win at New England in the AFC Championship Game, Flacco (six) surpassed Eli Manning (five) for the most road playoff wins ever by a quarterback.

The quarterbacks with the most road playoff wins in NFL history:

Flacco's production was not limited to the 2012 playoffs. He passed for a career-best 3,817 yards in the 2012 regular season, trailing only VINNY TESTAVERDE (4,177 in 1996) for the most passing yards in a single season in team history. Flacco already holds franchise career records in completions (1,507), passing yards (17,633) and touchdowns (102).

"He's come a long way, but he's come the way that you would expect any quarterback to develop," says Ravens head coach JOHN HARBAUGH about Flacco, who was selected No. 18 overall by Baltimore in the 2008 NFL Draft. "To see it happen like this is something that we kind of planned for, but it's also a great thing to see."