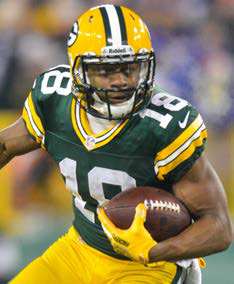 "If I'm able to do it and they want me to do it, perfect," says Cobb about his various roles on the team. "We have one goal here and that's to bring the title back home. Whatever it's going to take to bring us there, I'll do it."

Cobb totaled 2,342 combined net yards last season, the most in the NFL. He is the first Packers player to lead the league in the category since TRAVIS WILLIAMS in 1969 and his 2,342 yards set a franchise record.

Most Combined Net Yards in 2012

"He's a star in the making," says Green Bay quarterback AARON RODGERS about Cobb. "He's a big-time player. He has the right approach for being a professional. He takes his job very seriously. He's a lot of fun to play with and he's a good human being, which makes it even easier."

Selected in the second round of the 2011 NFL Draft, Cobb has scored 12 touchdowns in his first two seasons. He has nine receiving TDs, two punt-return scores and a 108-yard kickoff-return touchdown, tied for the longest in NFL history. Cobb is the only player in NFL history to score on a kick return (kickoff or punt) on Kickoff Weekend in each of his first two seasons.

"I really don't think I've peaked yet," says Cobb. "I've got a lot of learning still to do. I have a long way to go and I just hope I continue to get better."