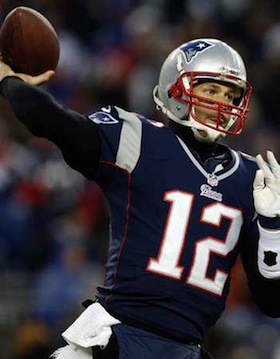 New England Patriots quarterback Tom Brady said he enjoyed getting to know Tim Tebow during their 2-plus months as teammates.

"I enjoyed being around him very much," Brady said of Tebow on the "Dennis & Callahan Show". "He's a very talented football player, and to have a chance to spend a couple months with him and kind of become a friend of his was a great thing."

"Yesterday we were talking about a lot of the quarterbacks that have been through our team over the years, and everyone brings a unique skill set and attitude to the table, and I really enjoyed being with him," he added.

Tebow was released by the Patriots when the team made the final cut Saturday. Tebow had an inconsistent preseason, going 11-of-30 passing in three games and tossing an interception and two touchdown passes against the New York Giants.

Patriots team owner Robert Kraft shared Brady's sentiment, saying he wanted Tebow to make the roster and hopes he gets another shot to play quarterback with a different team.

"I love Tim Tebow and I very much wanted him on the team," Kraft said. "If you look, four of the last five years we've only carried two quarterbacks, and you know when a cut-down time comes, you need those last three, four positions for depth."

When Tebow was cut, the Patriots have Ryan Mallett as the lone quarterback behind Brady on the depth chart.

Kraft is confident that Tebow will find success in his off-field ventures, and he remains hopeful Tebow has a chance to continue his football pursuits.

"Whatever he does, I know he's going to be a great success off the field and I'm rooting for him to get his opportunity on the field as well," he said.

Tebow, a former Heisman Trophy winner, was subject to the NFL's waiver system after his release, but he went unclaimed and is now a free agent.

Aside from the NFL, Tebow could look to the Canadian Football League as next destination but the CFL team that holds his negotiating rights doesn't sound interested in giving him a call.

"We haven't spoken to Tebow or his representative," Montreal Alouettes general manager/coach Jim Popp said, adding that "a team would have to change its entire system for Tim."

The New England Patriots have released quarterback Tim Tebow after his rocky showing in the preseason.

"I will remain in relentless pursuit of continuing my lifelong dream of being an NFL quarterback," Tebow wrote on Twitter. If Tebow clears waivers, he will become a free agent and can sign with any team.

Since he was signed by the Patriots at the start of minicamp in June, his place was already in doubt as New England carried only two quarterbacks last season -- Tom Brady and Ryan Mallett.

Tebow's inconsistent showing in the preseason also did not help his standing with the team. He completed 11 of 30 passes for 145 yards, two touchdowns and two interceptions in the preseason. Tebow also rushed 16 times for 91 yards and was sacked seven times.

In his NFL career, Tebow has completed 173 of 361 passes for 2,422 yards with 17 touchdowns and nine interceptions. He also rushed for 989 yards and 12 scores in his pro career.