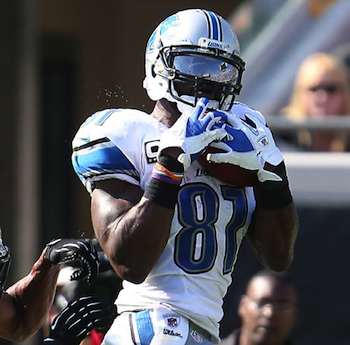 "It's a huge accomplishment to take one of those records from the great Jerry Rice," says Johnson, who became the first player in franchise history to lead the league in both receptions (122) and receiving yards. "It's an accomplishment that took a lot of work."

"Without a doubt, he's the best receiver in the league right now," says Rice.

"I've been an NFL fan my entire life and I've never seen a better player than Calvin Johnson," says Lions head coach JIM SCHWARTZ. "As good a player as you see on the field, he's a better person. He's a better teammate."

Johnson was named the NFC Offensive Player of the Month for November when he had 32 catches for 619 yards and three touchdowns. He averaged 154.8 receiving yards per game during November, the highest by a player in that month since Pro Football Hall of Famer LANCE ALWORTH (156.3 in 1963).

During December, Johnson had 44 catches, the most ever by a player in a single calendar month. He also became the first player in league history with at least 10 catches in four consecutive games.

"I can't say enough about Calvin," says Detroit quarterback MATTHEW STAFFORD. "The guy is unreal. I love having him as a teammate. I love throwing the ball to him. He just sets a great standard for all the guys on our team and everybody in this league." Johnson was selected to his third consecutive Pro Bowl and became the first Lions offensive player to accomplish the feat since Pro Football Hall of Famer BARRY SANDERS (1990-99).

"Give him a chance to develop and grow," says Rice. "If he continues to play ball the way he's doing it, he's going to be put up there with the best. This guy is gifted but also has the work ethic. He's only going to get better with that kind of attitude." In his first six NFL seasons (92 games), Johnson has 488 catches for 7,836 receiving yards and 54 touchdowns. He is one of only five players in NFL history with at least 7,500 receiving yards in his first 90 career games joining Pro Football Hall of Famers Alworth and Rice and RANDY MOSS and TORRY HOLT.