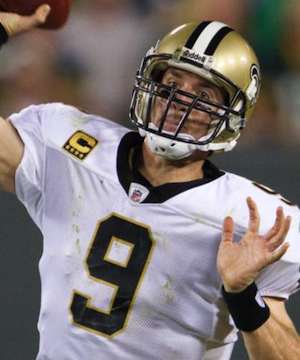 "I obviously take a lot of pride in what I do on the football field, because that has the ability to influence a lot of people," says Brees. "That puts smiles on people's faces. That gives people a pep in their step on Monday morning when they go back to work. That does so much for the city. We have the greatest fans in the world. There's no doubt about that. Each and every day I think about what can I do to make my team and my city better. That's my mentality."

Of the top five individual passing yard seasons in league history, Brees owns three of them, including an NFL-record 5,476 yards in 2011. Over the past three seasons, he has passed for 15,273 yards and is the only player in NFL history to pass for at least 15,000 yards in a three-year span.

Last season, Brees passed Unitas (47) for the most consecutive games with a touchdown pass, a record that had stood for more than 50 years. Brees extended his record to 54 games in a row with a TD pass.

Most Consecutive Games with TD Pass

"The amazing thing about a record like this is it spans over the course of four seasons," says Brees. "There are so many people that are a part of this."