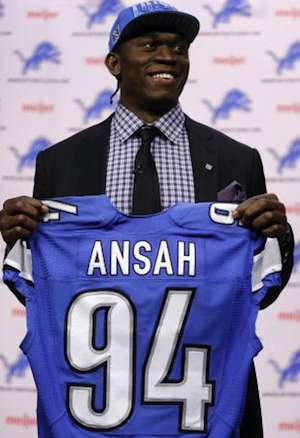 As the NFL continues to gain in popularity across the globe, more players are being developed outside the United States. This year, six international players were selected in the 2013 NFL Draft, including four in the first two rounds. Defensive end EZEKIEL ANSAH and linebacker BJOERN WERNER were both selected in the first round. Ansah, who hails from Ghana, was chosen with the fifth overall pick by the Detroit Lions. Werner, a native of Germany, was drafted by the Colts with the No. 24 overall selection.

Ansah was a walk-on at BYU and played football for the first time when he suited up for the Cougars in 2010. After two seasons as a reserve, Ansah earned a starting job early in the 2012 season, finishing with 4.5 sacks and 13 tackles-for-loss.

"I've given a lot for this game," says Ansah. "It hasn't been an easy road. It's competitive and it's a challenge to me. It just drives me. I want to be able to say at the end of my career I was able to achieve all that. I want to just stay focused and get better every single day."

Linebacker Bjoern Werner, who starred in college at Florida State, played football for the first time at age 15. In 2012, he was a unanimous All-America selection and earned ACC Defensive Player of the Year honors.

"I knew every NFL star and learned every team and every player in the game," says Werner, who learned about the NFL by playing the Madden video game. "Playing in the NFL was my ultimate dream when I came from Germany. This is just so amazing and so unbelievable."

In the second round, tackle MENELIK WATSON went to the Oakland Raiders (No. 42 overall) and defensive end MARGUS HUNT was selected by the Cincinnati Bengals (No. 53 overall). Hunt, who was born in Estonia, barely knew how to play football before attending Southern Methodist.

"I had to learn everything about football from scratch and pick it up fast," says Hunt. "I've really grown to love this game. I'm really grateful and blessed to be in the position I'm in."

A look at the six international players who were selected in the 2013 NFL Draft:

Foreign-born players currently in the NFL: