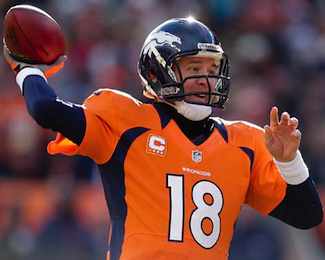 The defending Super Bowl champion Baltimore Ravens kick off the NFL 2013 season when they travel to Denver to face the Broncos.

And as always in the NFL, much of the attention will be on the men under center.

The rematch of last year's double-overtime AFC Divisional Playoff Game will feature quarterbacks Peyton Manning of the Denver Broncos and Joe Flacco of the Baltimore Ravens.

"This is my 16th opening day and I've played in this opening game three times," says Manning on playing Thursday in the NFL's annual primetime kickoff game. "It's got a little something extra to it. I think everybody will be excited and have some healthy butterflies. I think it's a good thing."

A team-by-team look at the quarterback position in the AFC in 2013:

Super Bowl XLVII MVP Joe Flacco enters his sixth year under center as the Ravens signal caller. In the 2012 playoffs, Flacco passed for 1,140 yards with 11 touchdowns and no interceptions for a 117.2 passer rating. His 11 postseason touchdown passes tied Pro Football Hall of Famer JOE MONTANA (1989) and KURT WARNER (2008) for the most touchdowns passes in a single postseason. The strong-armed quarterback is 54-26 (.675) as a starter in the regular-season and holds franchise career passing records in completions (1,507), yards (17,633) and touchdowns (102).

EJ Manuel gets the nod and will make his first NFL start this Sunday.

Bills first-year head coach DOUG MARRONE had two options at quarterback on Kickoff Weekend in rookies EJ MANUEL and JEFF TUEL. Manuel, who was selected No. 16 overall in the 2013 NFL Draft, registered a 25-6 (.806) record at Florida State, the third-most wins in school history, including four straight bowl game wins. Tuel, who started 26 games at Washington State, was signed as an undrafted free agent by the Bills on April 29. Tuel can become the first undrafted rookie quarterback to start a team's first game of a season in the common draft era (since 1967).

ANDY DALTON, who enters his third year, led the Bengals to the playoffs in consecutive seasons for first time since 1981-1982. A second-round selection (No. 35 overall) in the 2011 NFL Draft, Dalton has a 19-13 (.594) career regular season record, the highest winning percentage by a Bengals quarterback in franchise history (minimum 20 starts). In 2012, Dalton passed for a career-best 3,669 yards with 27 touchdowns and an 87.4 passer rating. Dalton will target Pro Bowl wide receiver A.J. GREEN, who has consecutive 1,000-yard seasons since entering the NFL in 2011.

BRANDON WEEDEN won the starting quarterback job after an open competition during training camp for the second consecutive season. The No. 22 overall pick in the 2012 NFL Draft will be directed by Browns first-year head coach ROB CHUDZINSKI and offensive coordinator NORV TURNER. In 15 starts in 2012, Weeden (3,385) passed for the most yards by a rookie in club history and ranked second among NFL rookies (ANDREW LUCK, 4,374).

PEYTON MANNING was named the 2012 NFL Comeback Player of the Year by The Associated Press after missing the entire 2011 season due to injury. The four-time NFL MVP passed for 4,659 yards with an AFC-best 37 touchdowns and 105.8 passer rating as he led the Broncos to an AFC West title. Manning, who is entering his 16th NFL season, ranks third all-time in career passing yards (59,487) and second in completions (5,082) and touchdown passes (436). Manning needs 1,875 passing yards in 2013 to surpass Pro Football Hall of Famer DAN MARINO (61,361) for second place all-time (BRETT FAVRE, 71,838).

MATT SCHAUB will play a pivotal role for the Texans in 2013. The 10-year veteran enters his seventh season as the starting quarterback in Houston. Last season, Schaub led the Texans to a franchise-record 12 wins and registered his third season with 4,000+ passing yards (4,008). Schaub is the Texans' all-time leader in completions (1,732), passing yards (20,911) and touchdown passes (114). He will look to Pro Bowl wide receiver ANDRE JOHNSON, who registered a career-high 1,598 receiving yards in 2012.

ANDREW LUCK led the Colts to the postseason a year ago and became the first quarterback selected No. 1 overall to start a postseason game as a rookie. In 16 regular-season starts, Luck passed for 4,374 yards, topping CAM NEWTON's rookie record of 4,051 in 2011. The former Stanford product is the first rookie in NFL history with 4,000+ passing yards and 10+ wins. He also led seven game-winning drives in the fourth quarter or overtime, tied for the most by a starting QB in a single season, rookie or veteran, since at least 1970. Luck also recorded five rushing touchdowns, the most among AFC QBs last year.

Playing in only 10 games in 2012 due to a right forearm injury, BLAINE GABBERT will play a pivotal role in a new era in Jacksonville under rookie head coach GUS BRADLEY. Selected No. 10 overall in the 2011 NFL Draft, Gabbert has passed for 3,824 yards with 21 touchdowns in 24 career starts. Gabbert, who won the starting quarterback job in training camp, will make his second career start on Kickoff Weekend.

Acquired via trade by the Chiefs in March, ALEX SMITH will open a new chapter in his career in Kansas City. A former No. 1 overall pick by San Francisco in the 2005 NFL Draft, Smith looks to flourish under new Chiefs head coach ANDY REID. Since 2011, Smith is 19-5-1 (.780) as a starter and has passed for 4,875 yards with 30 touchdowns versus 10 interceptions and a 95.1 passer rating. Smith will look to Pro Bowl wide receiver DWAYNE BOWE in the passing game. Running back JAMAAL CHARLES, who led the AFC with 1,509 rushing yards last season, will solidify the Chiefs rushing attack.

RYAN TANNEHILL (3,294), who was selected eighth overall in the 2012 NFL Draft, started all 16 games last season and surpassed Pro Football Hall of Fame quarterback DAN MARINO (2,210 in 1983) for the most passing yards by a Dolphins rookie. Tannehill's 3,294 passing yards were the third-most among NFL rookies a year ago. In 2013, the former Texas A&M product is focused on returning the Dolphins to the postseason for the first time since 2008. Tannehill's top receiving target will be offseason free agent acquisition MIKE WALLACE.

TOM BRADY, a two-time NFL MVP, enters his 14th year with a 136-39 (.777) record -- the best winning percentage of any NFL quarterback in the Super Bowl era with at least 100 starts. Brady's 136 career regular-season wins are the fifth-most among starting quarterbacks in NFL history. Last season, Brady guided the Patriots to an AFC East title and became the first starting quarterback in NFL history to win 10 division championships. Brady also passed for an AFC-best 4,827 yards in 2012, joining PEYTON MANNING (12), DREW BREES (seven), Pro Football Hall of Famer DAN MARINO (six) and BRETT FAVRE (six) as the only players to reach 4,000 passing yards in five or more seasons.

Rookie quarterback gets the nod at starting quarterback for the Jets as Mark Sanchez is sidelined by injury.

Known for his playmaking ability outside of the pocket, third-year quarterback TERRELLE PRYOR made his first career start in Week 17 of the 2012 season and passed for 150 yards with three touchdowns (two passing, one rushing) and one interception. Acquired via trade by the Raiders from the Seahawks in April, MATT FLYNN has completed 55 of 81 passes (67.9 percent) for 731 yards with nine touchdowns versus two interceptions and a 123 passer rating in two career starts.

A proven winner since entering the NFL in 2004, BEN ROETHLISBERGER owns an 87-39 regular-season record (.690) as a starter, the third-best winning percentage among active NFL quarterbacks (minimum 10 regular-season starts). Entering his 10th NFL season, the Steelers' offensive captain has passed for 29,844 yards, the most passing yards in Steelers history. Roethlisberger has 191 career touchdown passes, trailing only Pro Football Hall of Famer TERRY BRADSHAW (212) for the most in franchise annals.

PHILIP RIVERS enters his 10th season and his first under the direction of rookie head coach MIKE MC COY. Since becoming the Chargers' starting quarterback in 2006, Rivers has led the club to four AFC West titles and ranks second in the NFL with 27,743 passing yards during that span (DREW BREES, 33,571). Last season, Rivers (3,606) became the first Charger to pass for 3,500 yards in five consecutive seasons. His 27,891 career passing yards trail only Pro Football Hall of Famer DAN FOUTS (43,040) in team annals. The durable QB has started 112 consecutive games, the second-longest active streak of any NFL quarterback (ELI MANNING, 135).

JAKE LOCKER enters his second season as the Titans' starter on Kickoff Weekend. The eighth overall pick in the 2011 NFL Draft played in 16 games his first two seasons and passed for 2,718 yards with 14 touchdowns. Locker displayed his elusiveness outside of the pocket rushing for 291 rushing yards (7.1 average), the most among AFC QBs, on 41 attempts. Locker will be aided by All-Star running back CHRIS JOHNSON and a retooled offensive line featuring ANDY LEVITRE, who was a free-agent acquisition this offseason, and rookie CHANCE WARMACK, who was selected No. 10 overall in the 2013 NFL Draft.