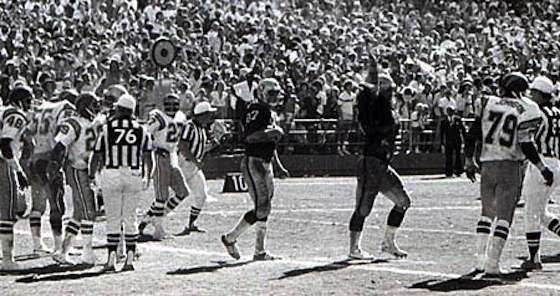 In 1978, one of the most memorable plays in NFL history took place, one that would be called the "Holy Roller."

The Oakland Raiders had won 18 consecutive games against the San Diego Chargers from 1968-77 before the Chargers won the AFC West rivals' second meeting in 1977. San Diego was poised for another victory over Oakland in Week 2 of the 1978 season, leading 20-14 in the waning moments of the game. But the Raiders still had time for one last play with the ball on the Chargers' 14-yard line.

"(Chargers linebacker) WOODY LOWE beat whoever was supposed to block him and he came in pretty clean and got to me just as I had begun to set up," says former Raiders quarterback KEN STABLER. "He got to me pretty quick and that's when everything starts to take place."

"I was about to get my hands on Kenny," says Lowe. "Kenny was backing away and I thought he had tried to throw the ball underhanded. I thought it was an incomplete pass. I thought I was the hero of the game, to be honest."

Raiders running back PETE BANASZAK called for Stabler to throw him the ball by yelling, "Snake! Snake!," Stabler's nickname. The quarterback was hit and fumbled the ball forward to Banaszak, who, in trying to scoop the ball up, botched his attempt and propelled it forward toward the Chargers' goal line. The ball then hit the foot of Raiders Hall of Fame tight end DAVE CASPER on the two-yard line and caromed into the end zone before Casper fell on it to tie the game at 20-20. Oakland kicker ERROL MANN converted the game-winning point-after try with no time left on the clock to give the Raiders a 21-20 victory.

The play was dubbed "The Holy Roller."

"It was one of those things that, maybe you can't do that, but the rules say you can do that, so you can do that, and if you don't want to do that, then go change the rule," says Hall of Famer JOHN MADDEN (right), then the Raiders head coach. "And that's exactly what they did; they changed the rule. Now you can't do it anymore."

Madden is partially correct. By the players' own admission, Stabler intentionally fumbled forward and Banaszak deliberately fumbled the ball toward the Chargers' goal line knowing he had no chance to advance the ball with San Diego defenders around him. Both acts violated NFL rules. However, neither was discernable to officials on the scene.

Following the 1978 season, the NFL rulebook was amended under Rule 8, Section 4, Article 2: "After the two-minute warning, any fumble that occurs during a down (including a PAT), the fumbled ball may only be advanced by the offensive player who fumbled the ball, or any member of the defensive team."