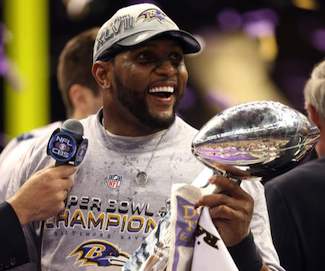 Those were the words of Baltimore linebacker Terrell Suggs moments after the Ravens defeated the San Francisco 49ers 34-31 in Super Bowl XLVII.

The road to the Super Bowl is never easy and the Ravens persevered to accomplish the ultimate goal for any NFL team.

Baltimore sealed its championship by stopping the 49ers' offense deep in Ravens' territory in the final minutes. It was a fitting end for Ravens linebacker Ray Lewis, who ended his decorated 17-year career on top. "We've always said that when you win a championship, one man won't win the ring," says Lewis. "It will be a complete team. What better way to go out."

Baltimore quarterback Joe Flacco, who was named Super Bowl MVP, says the Ravens' flair for the dramatic in Super Bowl XLVII was only appropriate. "I think it is fitting that we won that way," says Flacco. "We are a tough, bluecollar city and that's the way our games kind of come down. We were up 28-6 and I'm sure some people thought, ‘This one might be pretty easy.' And the next thing you know, the Niners got right back into it and played great football and we had to grind it out."

The Ravens finished the regular season with a 10-6 record and won back-to-back AFC North titles for the first time in franchise history.

Former NFL general manager and current ESPN analyst BILL POLIAN says a big part of the Ravens' success and consistency is owed to Baltimore general manager Ozzie Newsome, who is known as a respected talent evaluator around the league.

"Oz understands more than anything else how to put a team together, not just a group of 53 guys, but a team that works and functions together," says Polian. "He's a great judge of talent. He's able to use a great scouting staff to uncover terrific gems down in the lower part of the draft."

Under Newsome's direction, the Ravens have the highest postseason winning percentage since 1970. Baltimore is also the only team in the NFL to win a playoff game in each of the past five seasons.

The teams with the highest postseason winning percentage since 1970:

Ringing In The New Year

Two days after visiting the White House, the Baltimore Ravens capped a celebratory week with a gala to present Super Bowl XLVII championship rings to every member of "THE TEAM. THE TEAM. THE TEAM," head coach JOHN HARBAUGH's mantra which is engraved on the inside of the ring. In addition to players, coaches and staff, owner STEVE BISCIOTTI provided rings for John and David Modell, the sons of late owner Art Modell, and members of the Ravens' Ring of Honor.

"Players, coaches and staff were excited when they received their rings, which symbolize our Super Bowl victory," says Ravens President DICK CASS. "Each ring is a personal reminder of what we achieved as a team this past season." 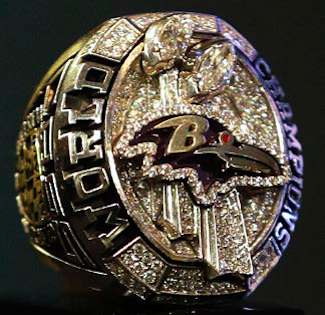 The 10-karat white gold ring with yellow-gold highlights boasts 243 round cut diamonds for a 3.75 carat weight and weighs 380 grams (13.4 ounces). The Baltimore Ravens logo, outlined with 40 diamonds, is featured on the ring's face in front of two Lombardi Trophies, representing the franchise's two NFL titles.

The ring includes the Super Bowl XLVII logo and the year 2012 -- set with 39 diamonds -- on the right side, while the left side displays the person's name, the Ravens shield, the Maryland flag and the words "Play Like a Raven," a Baltimore slogan signifying toughness, hard work and humility.

"There's no better way to go out," says Lewis, who along with Super Bowl XLVII MVP JOE FLACCO helped Bisciotti design the ring. "I can hold this the rest of my life and know I went out as a champion. It took me 12 years to get back and get another ring. I want my teammates to cherish what this moment feels like while we're world champs. Now, to have something that symbolizes it, it's the ultimate because it connects us forever."