Colin Kaepernick Off to an Outstanding Start 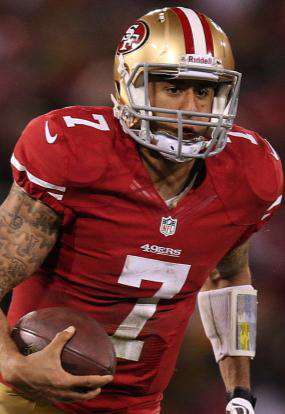 San Francisco's COLIN KAEPERNICK took over as the team's starting quarterback in Week 11 last year and guided the 49ers to a berth in Super Bowl XLVII.

"When I first started starting, I was just trying to do well and make sure we were winning games," says Kaepernick. "And now I'm just trying to stay focused on what we're trying to achieve."

In his 10 starts (including the postseason), Kaepernick posted a 7-3 record with a 100.2 passer rating. He passed for 2,406 yards with 14 touchdowns versus five interceptions and rushed for 502 yards and five TDs.

In leading the 49ers to Super Bowl XLVII, Kaepernick became the fourth quarterback in the Super Bowl era to start the Super Bowl in the same season as his first career NFL start, joining TOM BRADY, KURT WARNER and VINCE FERRAGAMO.

His seven career regular-season starts were the third-fewest for a starting quarterback in the Super Bowl, trailing only JEFF HOSTETLER (four) and Ferragamo (five).

"What impresses me is that he's a young guy, who only started half of the season," says 49ers running back FRANK GORE about Kaepernick. "When things go wrong, he stays calm. Defenses just don't know what they're going to get from him. He can run, throw and block. He can do whatever."

"Probably the most talented player right now is Colin Kaepernick," says Houston Texans tight end OWEN DANIELS. "A few guys have special ability to be a dual threat, going back to MICHAEL VICK and RANDALL CUNNINGHAM. Now you've got Colin Kaepernick. His game is awesome."

Colin Kaepernick Off to an Outstanding Start