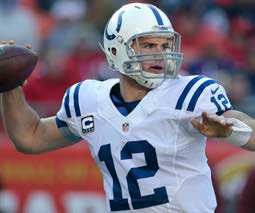 "These guys redefined what it is to be a rookie quarterback," says ESPN analyst and Pro Football Hall of Fame quarterback STEVE YOUNG. "No one will ever have the same expectations again."

The starting rookie quarterbacks to win at least 11 games (since 1966):

Luck's seven game-winning drives in the fourth quarter or overtime tied for the most by a starting QB in a single season -- rookie or veteran -- since at least 1970. Wilson's 26 TD passes tied PEYTON MANNING's NFL rookie record set in 1998. Wilson also became the first rookie QB in the Super Bowl era to lead his team to an undefeated home record (8-0).

Washington's Robert Griffin III (102.4) and Wilson (100) finished the season as the NFL's No. 3 and No. 4 leading passers, respectively. Griffin and Wilson are the only qualifying rookies in NFL history with a 100+ passer rating.

The rookies with the highest passer rating in NFL history (qualifiers):

And the quarterbacks weren't the only rookies to make an impact in 2012.

Kicker BLAIR WALSH of Minnesota converted 10 of 10 FG attempts of 50+ yards, the most in a season in NFL history (rookies and veterans).