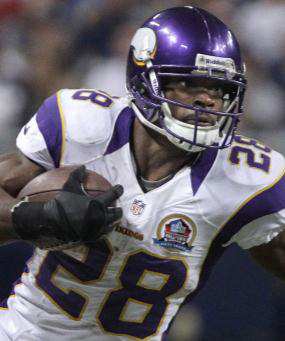 Last year, Minnesota running back Adrian Peterson rushed for 2,097 yards, the second-most in a season in NFL history, and guided the Vikings to a playoff berth. He finished the season just nine yards shy of breaking Pro Football Hall of Famer ERIC DICKERSON's NFL record (2,105 in 1984) and was named the NFL's Most Valuable Player and the NFL's Offensive Player of the Year by The Associated Press.

"It is truly an honor to be recognized as the league's most valuable player," says Peterson. "While the award is considered an individual achievement, I couldn't have had the success that I did without my teammates, my coaches and the Vikings organization. I'm blessed to be a member of the Vikings, and I hope we can get the ultimate team award by bringing a Super Bowl championship to Minnesota."

Peterson recorded seven games with at least 150 rushing yards last year, tied with Pro Football Hall of Famer EARL CAMPBELL (1980) for the most in a season in NFL history. In Week 17, Peterson rushed for 199 yards and a touchdown as he led the Vikings to a 37-34 win over the Green Bay Packers to clinch a playoff berth.

"He is, without question, the best running back in our game and truly, in my mind, the MVP of our league," says Minnesota head coach LESLIE FRAZIER. "He is special in every way."

Peterson set a franchise record with eight consecutive 100-yard rushing games (Weeks 7-15) and during that span, he totaled 1,313 yards, the most by any player in NFL history over any eight-game stretch in a single season. "There aren't many like him," says Pro Football Hall of Famer EMMITT SMITH, the NFL's career all-time leading rusher. "He is a guy that has the inside running ability, the outside running ability and the breakaway speed. Plus the sheer brute strength when he needs it. And he's tough."

"Adrian has carried on that great tradition of excellent, creative and captivating runners," says Sanders. "There are some things that he and I do similar, and then there are things that we do a lot different. He's a beautiful runner and is so skilled with the ball. He is great to watch."

In NFL history, there have been only seven individual 2,000-yard rushing seasons. No player has ever reached the mark twice. But Sanders, who rushed for 2,053 yards in 1997, thinks that Peterson is the man to accomplish the feat.

"Adrian is going to be the first guy to gain 2,000 yards in multiple years," says Sanders. "I would pick Adrian."