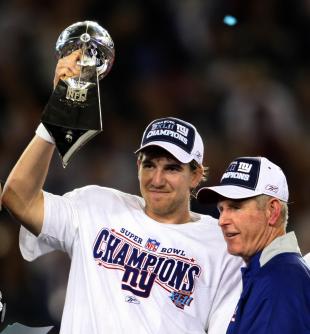 Super Bowl XLII: "One of the Greatest Games of All Time"

He ought to know. He's a player in the NFL who knows its history. He's another Manning maybe you've heard of -- Peyton -- and that was his summary of Super Bowl XLII last Sunday night in Glendale, Arizona:

"One of the greatest games of all time."

In the game, his brother, New York Giants quarterback ELI MANNING, engineered one of the most memorable late-game-winning drives in Super Bowl history for a 17-14 victory over the New England Patriots at University of Phoenix Stadium. That drive included what many are calling the greatest play in Super Bowl history.

The Giants won their first Super Bowl in 17 years, and their thirdoverall, while the Patriots joined the 1934 and 1942 Chicago Bears as the only teams to go undefeated in the regular season but lose their championship game.

The Giants opened the game with a 16-play, 63-yard drive that resulted in Lawrence Tynes' 32-yard field goal with 5:01 left in the first quarter. It was the longest game opening drive in Super Bowl history.

The Giants drove to the Patriots' 14 on their next possession, but Ellis Hobbs intercepted Manning's deflected pass to stymie the drive. The Giants had the last scoring opportunity of the half, but Ahmad Bradshaw was flagged 10 yards for illegally batting forward a fumble, which took the Giants out of field-goal range.

The Patriots drove to the Giants' 25 to begin the third quarter, but on third down Michael Strahan sacked Tom Brady for a 6-yard loss. On fourth-and-13 from the Giants' 31, Brady attempted a deep pass that sailed out of the end zone.

With 14:52 to play beginning from their own 20-yard line, Manning connected on a 45-yard pass over the middle to Kevin Boss. Moments later Steve Smith caught a 17-yard pass on third-and-4, and two plays later Manning found David Tyree open over the middle for a 5-yard touchdown for a 10-7 lead with 11:05 to play.

After an exchange of punts, the Patriots took possession on their own 20-yard-line with 7:54 to play. Brady completed 8 of 11 passes on the 80-yard drive, none for more than 13 yards, capped by Randy Moss' 6-yard touchdown catch on third-and-goal with 2:42 to play.

The Giants and Manning took possession on their own 17-yard line with 2:39 left. Manning completed an 11-yard pass to Amani Toomer, and four plays later Brandon Jacobs gained 2 yards on fourth-and-1. Three plays later, faced with third-and-5 from their own 44 with 1:15 remaining, Manning dropped back to pass. He escaped the simultaneous grasps of Jarvis Green and Richard Seymour, spun away and then launched a pass deep down field. Tyree and Rodney Harrison both leapt for the ball, and Tyree caught the ball in midair and cradled it against his helmet while falling to the ground with Harrison draped all over him.

The 32-yard reception to the Patriots' 24 gave the Giants a chance, and Smith's 12-yard catch on third-and-11 moments later put the ball at the Patriots' 13. On the next play, Burress caught a fade pass from Manning with 35 seconds left for the game-winning touchdown

The Patriots started from their own 26 with 29 seconds remaining, and on second down Jay Alford sacked Brady for a 10-yard loss. Brady's final two long pass attempts to Moss fell incomplete.

Manning was 19 of 34 for 255 yards and 2 touchdowns, with 1 interception, and was named the game's most valuable player, one year after his brother, Peyton, won the award for the Colts.

During the game-winning drive, Manning made the play of the game by escaping the simultaneous grasps of two Patriots' defensive linemen, spinning away and launching a deep pass downfield that wide receiver David Tyree caught in midair and cradled against his helmet as he fell to the ground for a 32-yard gain.

Eli Manning completed 19 of 34 passes for 255 yards and two touchdowns (Tyree also caught a five yard scoring pass early in the fourth quarter to give the Giants a 10-7 lead).