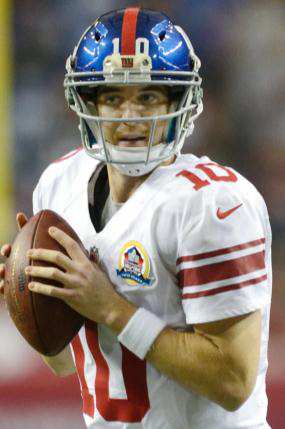 Quarterbacks will be in the spotlight as the NFL gets back to football.

Last season, quarterbacks put together an historic season. The league-wide passer rating (85.6) and touchdown-interception ratio (1.62:1) were both at all-time highs. Games averaged 462.6 net passing yards per game, the highest in NFL history. There were 126 individual 300-yard passing games in 2012, the most in a season, and six quarterbacks passed for at least 4,500 yards, tied for the most ever. And 20 of the 32 NFL teams (62.5 percent) started the same quarterback in every game, the most of any season since at least 1970.

Quarterbacks throughout the NFL find themselves in the spotlight as the NFL gets back to football, all hoping to lead their teams to a berth in Super Bowl XLVIII on February 2 at MetLife Stadium.

A team-by-team look at the NFC's projected starting quarterbacks on Kickoff Weekend:

Sixth-year quarterback MATT RYAN set franchise records for attempts (615), completions (422), completion percentage (68.6), yards (4,719) and touchdowns (32) last season as he guided the Falcons to the top seed in the NFC with a 13-3 record and a berth in the NFC Championship Game. Ryan had a career-best 99.1 passer rating in 2012 and was selected to his second consecutive Pro Bowl. In his career, Ryan has led Atlanta to a 56-22 (.718) record and his 56 wins are the most by a starting quarterback in his first five seasons in NFL history. At home, he has compiled a 33-5 (.868) record as the team's starter.

CAM NEWTON will make his third Kickoff Weekend start for the Panthers. Newton, the No. 1 overall selection in 2011, has started every game in his first two years and was selected to the Pro Bowl following the 2011 season. In his career, he has passed for 7,920 yards, the most by a player in his first two seasons, and is the only quarterback in league history to rush for at least 500 yards in each of his first two years. Newton is the only player in NFL history with at least 5,000 passing yards (7,920), 25 passing touchdowns (40), 1,000 rushing yards (1,447) and 15 rushing touchdowns (22) in his first two seasons.

TONY ROMO begins his 11th NFL season with a career 55-38 (.591) record as the team's starter. Last year, Romo started all 16 games and set franchise records in passing yards (4,903), attempts (648) and completions (425). He owns the only four 4,000-yard passing seasons in franchise history. Romo passed for 28 touchdowns in 2012 and is the only Cowboys player with at least 25 touchdown passes in five different seasons. A three-time Pro Bowl selection, Romo has a career 95.6 passer rating, which is the fifth-highest mark in NFL history (minimum 1,500 attempts).

MATTHEW STAFFORD, the No.1 overall selection in 2009, will start on Kickoff Weekend for the fifth consecutive season. Last year, Stafford started all 16 games and set an NFL single-season record with 727 pass attempts. He passed for 4,967 yards in 2012 and is one of only three players in NFL history (Drew Brees, Tom Brady) to pass for at least 10,000 yards in a two-year span (franchise-record 5,038 yards in 2011). In just four seasons, Stafford is already the franchise leader in completions (1,114) and ranks second in both passing yards (12,807) and touchdown passes (80).

AARON RODGERS begins his sixth consecutive season as the Packers' starting quarterback. Last year, he started all 16 games and completed 371 of 552 passes (67.2 percent) for 4,295 yards with 39 touchdowns versus eight interceptions for a 108 passer rating. Rodgers, who has been selected to the Pro Bowl in three of the past four seasons, has 21,332 passing yards since 2008, the most in NFL history by a QB in his first five seasons as a starter. He is one of only two players in NFL history (Steve Young) to register a 100+ passer rating in four consecutive seasons and Rodgers' 104.9 career passer rating is the highest in league annals (minimum 1,500 attempts).

CHRISTIAN PONDER, the team's first-round pick in the 2011 NFL Draft (No. 12 overall), will make his second Kickoff Weekend start. Last year, Ponder started all 16 games and led the Vikings to 10 wins and a postseason berth. He completed 300 of 483 passes (62.1 percent) for 2,935 yards with 18 touchdowns and 12 interceptions for a 81.2 passer rating and rushed for 253 yards and two TDs. Ponder had eight games in 2012 in which he did not throw an interception and the Vikings posted a 7-1 (.875) record in those contests.

Entering his eighth year in New Orleans, DREW BREES has passed for at least 4,000 yards in each of the past seven seasons -- the top seven passing totals in club history -- and is the only player in NFL history with multiple 5,000-yard seasons (2008, 2011, 2012) and consecutive such seasons (2011, 2012). Brees passed for 5,177 yards and 43 touchdowns last year and earned his seventh career Pro Bowl selection. He is the only player in league annals to have consecutive seasons with at least 40 TD passes and has led the NFL in the category four times, tied for the most all-time. Brees' streak with at least one touchdown pass reached 54 consecutive games and is the longest in league history.

ELI MANNING, the No. 1 overall selection in 2004, has led the Giants to two Super Bowl victories (XLII, XLVI) and is one of only five players in NFL history to win multiple Super Bowl MVP honors. He has started 135 consecutive games, the longest active streak in the NFL. Last year, Manning passed for 3,948 yards and 26 touchdowns. He has passed for at least 3,000 yards and 20 touchdowns in each of the past eight seasons joining Drew Brees as the only QBs to accomplish the feat. Manning is the only Giants QB to throw for at least 3,000 yards in eight consecutive seasons and the only player in team history with 20+ TD passes in eight years in a row.

SAM BRADFORD, the No. 1 overall selection in 2010, will start on Kickoff Weekend for the fourth consecutive year. He started all 16 games last year and passed for a career-high 3,702 yards and 21 touchdowns. Bradford, who was the 2010 AP Offensive Rookie of the Year, has passed for at least 3,500 yards in two of his first three NFL seasons. He has started 42 games in his first three years, passing for 9,378 yards and 45 touchdowns. Bradford has recorded a passer rating of at least 100 in seven games and the Rams are 5-1-1 (.786) in those contests.

After taking over as the team's starting quarterback in Week 11, COLIN KAEPERNICK guided the 49ers to a berth in Super Bowl XLVII, becoming the fourth quarterback to start the Super Bowl in the same season as his first career start. In 10 career starts (including the postseason), he has posted a 7-3 record with a 100.2 passer rating. In those 10 contests, Kaepernick has passed for 2,406 yards with 14 touchdowns and rushed for 502 yards with five TDs. In last year's playoffs, Kaepernick had a 100.9 passer rating and rushed for 264 yards, becoming the first quarterback in NFL history with a 100+ passer rating and at least 200 rushing yards in a single postseason.

RUSSELL WILSON, who was drafted in the third round (No. 75 overall) in 2012, enters his second NFL season after starting all 16 games last year. As a rookie, he led the Seahawks to 11 victories -- including a perfect 8-0 record at home -- and joined Robert Griffin III as the only rookies in NFL history to post a 100+ passer rating (100.0). Wilson, who was selected to the Pro Bowl last season, had a 100+ passer rating in nine games and is the only rookie in league annals to post a 125+ rating in three consecutive games. Wilson, who passed for 3,118 yards, threw 26 touchdown passes, tying Peyton Manning's rookie record.

Fifth-year quarterback JOSH FREEMAN set franchise records with 4,065 passing yards and 27 touchdown passes last year. Freeman, who has started 47 games over the past three years, is the only player in club history to record three consecutive 3,400-yard seasons. Freeman is one of only two players (Aaron Rodgers) in the NFL with at least 3,400 passing yards and 125 rushing yards in each of the past three seasons. In 57 career games, including 56 starts, Freeman has 78 touchdown passes, the most in team history.

ROBERT GRIFFIN III, the No. 2 overall selection in 2012, led Washington to a division title in his first season as the team's starting quarterback. Griffin, the 2012 AP Offensive Rookie of the Year, set an NFL rookie record with a 102.4 passer rating, completing 258 of 393 passes (65.6 percent) for 3,200 yards with 20 touchdowns and five interceptions. He also rushed for 815 yards -- the most ever by a rookie QB -- and seven touchdowns. Griffin, who was selected to the Pro Bowl last year, is the only player in NFL history with four 60+ yard passing touchdowns and a 60-yard rushing TD in a single season.