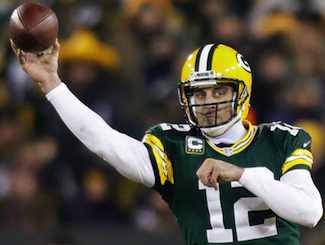 "I'm driven to be the best," says Rodgers. "I put a lot of pressure on myself to achieve the goals I set every year. I enjoy trying to meet the challenge those goals bring."

Rodgers, who was named the 2011 NFL Most Valuable Player by The Associated Press after posting an NFL single-season record 122.5 passer rating, has a 114.9 passer rating over the past two seasons, the highest two-season mark in NFL history.

"Aaron is an excellent illustration of a Green Bay Packer," says Packers head coach MIKE MC CARTHY. "It is truly a blessing to witness his continued accomplishments, both on and off the field." Rodgers has recorded a 100+ passer rating in each of the past four seasons. He and Pro Football Hall of Famer STEVE YOUNG (1991-94) are the only quarterbacks in NFL history with a 100+ rating in four seasons in a row.

"Aaron is a true professional and a special player," says Green Bay Executive Vice President, General Manager and Director of Football Operations TED THOMPSON. "He works hard, is humble and is focused on his actions, on and off the field. He is an excellent teammate and pushes himself and others to be the very best."

"To be successful in this league, you need a supporting cast and you need an organization that supports you," says Rodgers. "I couldn't have asked for a better spot to be in. The winning tradition we have here and the expectations we have here, it was a perfect fit. It's been fun to have success both individually and as a team."