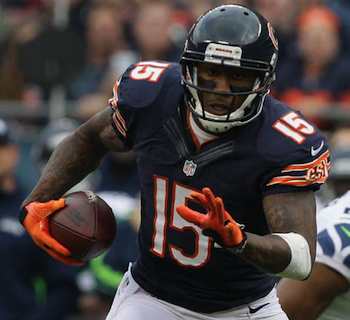 All three players recorded at least 1,500 receiving yards, marking the third time in NFL history three or more players accomplished the feat in the same season.

Andre Johnson ranked second in the NFL with a franchise-record 1,598 receiving yards in 2012 and reached the 1,500-yard mark for third time in his career.

"I've been around this league a long time and I've been fortunate to be with some Hall of Fame football players, and I think you're looking at one of the all-time greats," says Texans head coach Gary Kubiak on Johnson. "He's a special player, and a special person." Calvin Johnson led the league with 1,964 receiving yards last season, an NFL single-season record, and became the first player in NFL history with at least 1,600 receiving yards in consecutive seasons (1,681 in 2011).

"He's the best," says Arizona Cardinals All-Star wide receiver LARRY FITZGERALD about Johnson. "He's so big, so physical. He's got all the physical tools you can ask for, and mentally he's honed in. He's a good guy, a competitor. He's got the whole package."

Marshall recorded 1,508 receiving yards, the most in a single-season in Bears history, and became the fifth player in NFL history to record a 1,000-yard receiving season with three different teams. The other four to accomplish the feat are Irving Fryar, Tony Martin, Randy Moss and Terrell Owens.

In 2012, Marshall recorded at least 100 receptions for the fourth time in his career, tying Pro Football Hall of Famer Jerry Rice, Marvin Harrison, Andre Johnson and Reggie Wayne for the second-most such seasons in NFL history.

"We call him 'The Beast,'" says ESPN analyst and former NFL head coach JON GRUDEN. "He's a go-to-guy that needs the ball to survive. He's a bad matchup for a lot of guys. The more you get him the ball, the better he is."

Yards After the Catch

Denver Broncos wide receiver Demaryius ThomaS was third in the NFL in yards after the catch (561) and ranked fourth in the league with 1,434 receiving yards.

"Demaryius has done some good things," says Broncos quarterback PEYTON MANNING. "You can't just throw down the field every time, you've got to take a five-yard or a 10-yard hook route and turn it into a 20- or a 30-yard gain, and he's shown those type of plays. It's a real credit to him."

Thomas' new teammate, wide receiver WES WELKER, led the NFL in yards after the catch (719) in 2012 for the second consecutive season. Welker also led the AFC in receptions with 118 and finished fourth in receiving yards with 1,354.

"Today, in a passing league, high-completion percentage throws are what quarterbacks need to stay healthy," says NFL Network analyst SOLOMON WILCOTS. "The guy who moves the chains is Wes Welker. That's what he brings to the table."

The players with the most yards after the catch in 2012:

A precise route can be the difference between a game-changing play and an appearance by the punt team.

On third down, the top receivers carefully gauge each step to ensure their routes finish beyond the firstdown marker.

On his way to setting the all-time record for receiving yards in a single season (1,964), Detroit Lions Pro Bowl wide receiver Calvin Johnson was among the league leaders last year on third downs with 28 first-down catches.

"You can't just match up with him one-on-one," says Denver Broncos Pro Bowl cornerback Champ Bailey. "You definitely have to get your hands on him at the line. You have to be physical with him because if you let him build up any type of speed, it is hard to stop him."

The receivers with the most first-down receptions on third down in 2012:

Elite wide receives earn plenty of attention from opposing defensive backs. They get plenty of it from their quarterbacks, too.

"I love throwing to him," says Lions quarterback Matthew Stafford. "He's a great worker. He deserves all of it. He's a guy that puts forth the effort during the week that people don't see to accomplish those goals."

Johnson has been targeted 787 times since 2008 and has amassed more receiving yards (7,080) and receiving touchdowns (50) than any other player during that stretch. Among active players, only Brandon Marshall (815), Roddy White (815) and Larry Fitzgerald (790) have been targeted more times than Johnson during the past five seasons.

The most targeted receivers in 2012:

The most targeted receivers since 2008 among active players: