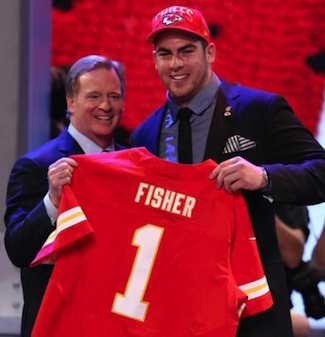 Protecting the quarterback is vital to NFL success.

With such a premium placed on keeping the quarterback out of harm's way, it is no surprise that teams have made it a priority to draft offensive tackles. Three offensive tackles -- Eric Fisher (No. 1, Kansas City) (left, with Commissioner Goodell), Luke Joeckel (No. 2, Jacksonville) and Lane Johnson (No. 4, Philadelphia) -- were selected within the top four picks of the 2013 NFL Draft. This group is the first trio of tackles since the advent of the common draft in 1967 to be selected among the first four picks in an NFL Draft.

Fisher became the fourth offensive lineman chosen first overall since the common draft was adopted in 1967.

"Quality football teams have foundations, and you build the foundations as you move along," says Chiefs general manager JOHN DORSEY. "Part of the philosophy that we have come in here with is to build that foundation with players like Eric. You start with the offensive line."

In all, there have been 13 offensive tackles selected in the first round of the past three NFL Drafts: