Quarterback Success in the NFL 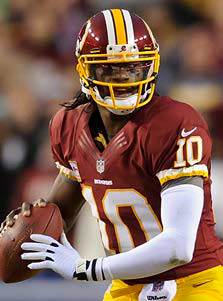 2012 was the Year of the Quarterback.

"It's a quarterback's league now," says CBS analyst and Pro Football Hall of Fame quarterback Dan Fouts. "It's how the game has evolved. You've got coaches willing to throw the ball more than ever, and you've got receivers who are the best athletes on the field. Why wouldn't a coach want to use them?"

This trend has helped allow the growing number of star NFL quarterbacks -- ranging from established veterans like Aaron Rodgers and Peyton Manning to promising youngsters like Robert Griffin III and Russell Wilson -- to fully showcase their passing talents.

"Everybody feeds off of what the quarterback can and cannot do," says ESPN analyst and Pro Football Hall of Fame quarterback Steve Young. "Defensively, offensively, everybody reacts to what threats or nonthreats the quarterback has. Everything else is secondary."

A big reason for that success was the consistent performance of the starters.

The NFL has strengthened safety rules throughout its history for all players, including quarterbacks.

"We need these quarterbacks," says Pro Football Hall of Fame head coach JOHN MADDEN, who now co-chairs the NFL's Player Safety Advisory Panel. "It's a passing league and a quarterback-driven league. We need guys like PEYTON MANNING, TOM BRADY and DREW BREES in football uniforms out there playing. We need those guys out on the field instead of them standing on the sideline."

A look at some of the rules designed to better protect quarterbacks over the past 20 years:

It is not intentional grounding when a passer, while out of the pocket and facing an imminent loss of yardage, throws a pass that lands beyond the line of scrimmage, even if no offensive player has a realistic chance to catch the ball (including if the ball lands out of bounds over the sideline or end line).

Protection for defenseless players is clarified and expanded, including passers.

When tackling a passer during or just after throwing a pass, a defensive player is prohibited from unnecessarily and violently throwing him down and landing on top of him with all or most of the defender's weight.

It is illegal to hit a quarterback helmet-to-helmet any time after a change of possession.

Low hits on the quarterback are prohibited when a rushing defender has an opportunity to avoid such contact.

The rule regarding low hits on passers is clarified and strengthened.

All "defenseless players," including passers, are protected from blows to the head delivered by an opponent's helmet, forearm, or shoulder.

Quarterbacks after a change of possession are protected from blows to the head delivered by an opponent's helmet, forearm, or shoulder, instead of just helmet-to-helmet contact

All players are required to wear protective knee and thigh pads.

It is illegal for a runner or tackler to initiate forcible contact by delivering a blow with the top or crown of his helmet against an opponent when both players are clearly outside the tackle box.

Many NFL games are decided in the fourth quarter. The difference between a win and a loss can come down to a clutch performer at quarterback. Some of the most memorable moments in NFL history have taken place with the game on the line.

"Jay's a very intelligent person," says Bears offensive coordinator AARON KROMER. "He knows football. He's had success in this league and we can move the football and score touchdowns with him."

Baltimore Ravens quarterback Joe Flacco was also at his best during his team's toughest moments. In 2012, Flacco posted a rating of 103.1 in the fourth quarter on the way to leading the Ravens to a victory in Super Bowl XLVII.

"When we needed him most, he stepped up and made plays, especially at the end," says Baltimore head coach John Harbaugh. "That's why he's a great quarterback, and he will be for a long time in this league."

The quarterbacks with the highest fourth-quarter passer rating in 2012 (minimum 80 attempts):

Quarterback Success in the NFL