Lawrence Okoye: From Discus to D-Line 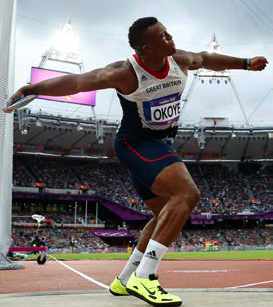 Great Britain track and field star Lawrence Okoye, who competed in the 2012 Summer Olympics in London, has never played organized football at any level. This spring, he attended the Super Regional Combine at Cowboys Stadium in Dallas and became a fast-rising NFL prospect following his performance.

Okoye, who holds the all-time discus record for Great Britain, impressed with a 4.84 40-yard dash time and standout performances in other drills. The San Francisco 49ers saw Okoye's potential to make the transition to the NFL as a defensive end and signed him as an undrafted free agent.

"The thing that really impressed me was that he had the rugby background growing up and didn't start throwing the discus until he was 18 years old," says 49ers head coach JIM HARBAUGH.

"And then two years later he was throwing in the Olympics. So, you maybe start to put the pieces together and say, taking on football at this time in his life, I can see this guy doing it. I'm excited." Okoye played rugby as a teenager and was also an exemplary student who deferred his admission to Oxford University, where he plans to study law in the future. He wants to use his rugby experience and strong work ethic to help with his transition to football.

"I had to work really hard to become good at it," says Okoye. "It's going to be the same path in this sport. When I start out, I'm not going to be as good as everybody else. I'm going to look out of place, that's for sure. But with some work and with time and effort, I know I can catch up and hopefully become a dominant player in the league."

Okoye sees similarities in his development to those of Detroit Lions defensive end EZEKIEL ANSAH and Cincinnati Bengals defensive end MARGUS HUNT, who were both selected in the 2013 NFL Draft. Ansah played football for the first time as a walk-on at BYU, while Hunt earned a football scholarship at SMU after becoming a gold medalist in the shot put and discus at the 2006 World Junior Championships.

"These are examples of guys who are physical specimens and have put their mind to it," says Okoye. "Now teams are seeing their potential. If they can do it, I see no reason why I can't do the same thing."

Lawrence Okoye: From Discus to D-Line