Importance of the Ground Game 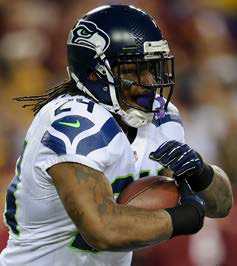 A tough, reliable running game allows an offense to dictate a game's pace. In the majority of contests, it can also control the game's result.

"There are so many good things that come from running the football," says Seattle Seahawks head coach PETE CARROLL, whose team posted a 7-3 record when Pro Bowl running back MARSHAWN LYNCH rushed for 100 yards in a game. "It adds to the mentality of your team. It adds to the toughness of your football club. We want to be a physical, aggressive, tough, get-after-you football team. And that's where we can send the biggest message about our commitment to that."

The winning percentage of teams with a 100-yard rusher, 100-yard receiver, or 300-yard passer over the past five seasons:

Importance of the Ground Game