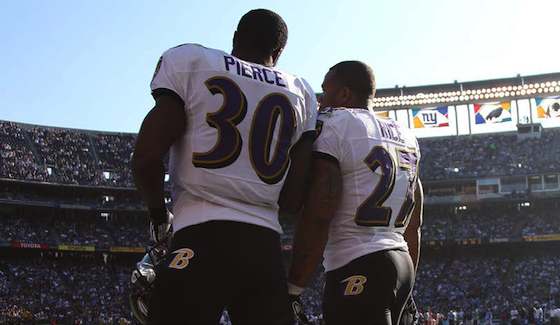 Last season, eight of the NFL's 12 playoff teams boasted multiple running backs with at least 300 rushing yards apiece during the regular season. Atlanta, Baltimore, Denver, Houston, Indianapolis, New England, San Francisco and Seattle each had a running back with at least 700 yards and a second back who amassed at least 300 yards in 2012. Despite the proliferation of the passing game, teams have continued to rely on different options in the backfield to gain an advantage.

"I think it is important that you use more than one running back," says Philadelphia Eagles offensive coordinator Pat Shurmur. "If you have guys that are different, you can use them in different ways, and you try to play to their strengths. I've always believed there is a place on the roster for two good running backs."

The NFC West champion San Francisco 49ers would agree. Led by the explosive tandem of Frank Gore and Kendall Hunter, San Francisco had the fourth-best rushing attack in the NFL at 155.7 yards per game on its way to the franchise's first Super Bowl appearance since 1994. Gore finished the season fifth in the NFC in rushing yards with 1,214 while Hunter added 371 yards of his own.

"I think they are great for each other," says 49ers head coach Jim Harbaugh about Gore and Hunter. "Both are tremendous backs. Frank is one of the best there is, and he's made Kendall better. I don't think I am exaggerating by saying that Frank has benefited from that as well."

Five of the past six Super Bowl champions have boasted a backfield with at least two 500-yard rushers, including the Super Bowl XLVII champion Baltimore Ravens. Aided by the combination of Ray Rice (1,143) (above, on right) and Bernard Pierce (532) (above, on left), the Ravens won the AFC North title en route to defeating the 49ers in the Super Bowl.

"I want to be that tandem that people are scared to go up against," says Pierce about what he likes about being a part of a running back tandem. "I want to be that one-two punch that everybody is talking about."

The playoff teams that employed two running backs with at least 300 rushing yards each in 2012: