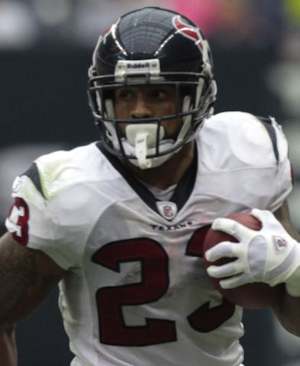 They seem to be all over the league.

Running backs like Adrian Peterson, Arian Foster, Doug Martin, Ray Rice and others. Those running backs that can hurt you two ways: rushing … or catching … the ball.

"If a running back has certain skills like speed, vision, burst, ability to cut and good hands, he can play in any system, whether it's the I-formation, offset or in a spread," says general manager Ozzie Newsome of the Super Bowl XLVII champion Baltimore Ravens.

"I think you have five eligible receivers, and you want to be able to make sure that the defense has to defend them all," says Philadelphia Eagles head coach Chip Kelly. "If you become a protection-first running back scheme and now there are only four receivers they have to match up with, you are going to face a lot more double coverage." More and more, offenses are relying on these dual-threat runners to keep the chains moving. Six running backs gained more than 1,000 rushing yards while registering at least 40 catches in 2012.

"This guy is arguably the best football player in the world right now. He's got a great deal of God-given ability. He's big, strong and fast. He also has the things that you can't measure. He doesn't turn down challenges." -- Pittsburgh head coach Mike Tomlin

"He has a low center of gravity and he's got great vision as far as cutback ability. He's also a guy you have to pay attention to on the check downs. He can sneak out of the backfield and they run screens with him. He is a dynamic football player that fits exactly what they're looking for." -- Carolina head coach Ron Rivera

"He's a three-down football player. He never leaves the field, and he's a young player with a tremendous amount of upside. He's versatile, always falling forward. He runs good routes. The thing that not many people know is just how smart of a player he is. Arian's really on top of his game. He's the total package." -- Houston head coach Gary Kubiak

"I have tremendous respect for C.J. Spiller. They run their offense around him, and he'll get even more activity now. And that means that there is a chance for them to score on every play, run or pass." -- Seattle head coach Pete Carroll

"He's a major part of their passing game. Any time a quarterback has confidence in a back to get him off the hook when there's pressure or somebody's not open, it's easy to throw the ball to a guy like Ray Rice, let him run with it and see what he can do." -- New England head coach Bill Belichick

"He's one of the best screen runners in the NFL. He's had success against a lot of opponents on screens. It's a big part of what they do on offense." -- Detroit head coach Jim Schwartz