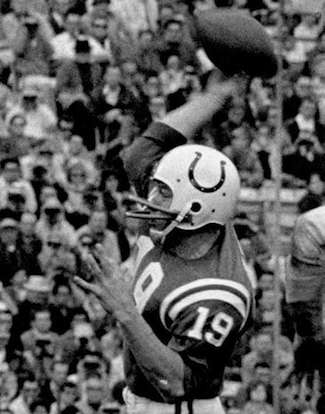 For more than 50 years, Pro Football Hall of Famer JOHNNY UNITAS' streak of 47 consecutive games with a touchdown pass stood in the NFL record books.

In Week 5 of 2012 against the San Diego Chargers, his former team, Brees surpassed Unitas for the most consecutive games with a touchdown pass, reaching his 48th game in a row.

"Johnny Unitas held this record for 52 years and is arguably one of the best quarterbacks in this game," says Brees. "He really revolutionized the position with everything that he stood for as a player. He was just a pioneer of this game. It's a tremendous honor. It's humbling and certainly a record that we all very much appreciate."

Unitas held sole possession of the record for 19,663 days before Brees tied the mark in Week 4 last season. Brees' touchdown streak came to an end at 54 consecutive games in Week 13 at Atlanta.

And while Unitas' record stood for more than half a century, Brees' mark is already being challenged.

Week 17 against Miami last season, Brady surpassed Unitas for the second-longest streak in NFL history and now trails Brees by

Most Consecutive Games with TD Pass