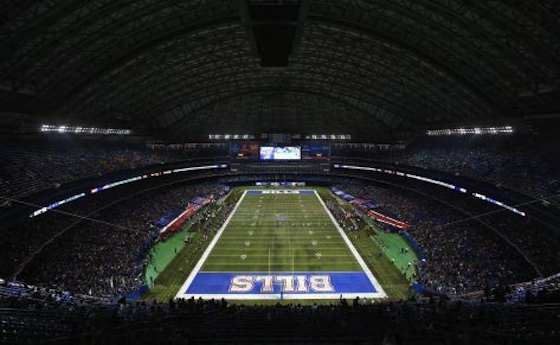 "Closer to home," the Buffalo Bills will continue to carry the NFL's international mantle northward to Toronto when they play the Atlanta Falcons on December 1 at the Rogers Centre.

In 2007, NFL owners unanimously approved a plan for the Bills to play a number of preseason and regular-season games in Toronto -- Canada's largest city -- each year from 2008-2012. This past January, Rogers Media and the Bills announced a renewed five-year partnership that runs through 2017 and will see the Bills play a total of six games at the Rogers Centre during that time: one regular-season game each season plus one preseason game in 2015.

"The Bills partnership with Rogers Media is key to our franchise's regionalization plan and we are excited to continue it for years to come," says Bills President and CEO Russ Brandon. "Our regionalization efforts have strengthened the franchise's foothold in Western New York by supporting our efforts to further develop our fan base in Toronto and Southern Ontario. The Bills-Rogers Media partnership continues to give us tremendous exposure in the market and its success will only accelerate with a few wins on the field."

Adds Rogers Media President Keith Pelley, "Rogers Media is committed to producing and delivering premium sports content and experiences for fans. We are ambassadors of the NFL and are continually assessing the market to bring that true NFL experience to Canadians. We created a benchmark for our game last season with a first-rate pregame festival and halftime show, and look forward to building on that over the next five years."