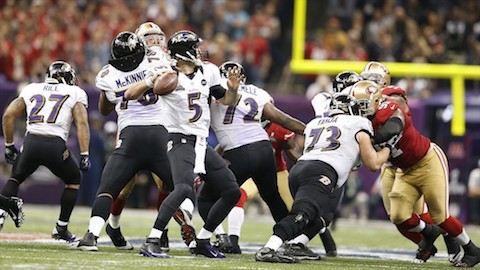 The Baltimore Ravens held on to top the San Francisco 49ers 34-31 in Super Bowl XLVII. The game was a closely-fought battle that started out looking like a blowout until it was interrupted by a power outage at the Superdome. The Ravens were ahead by 28-6 when play was halted due to the power outage that lasted 35 minutes.

When power was restored, the 49ers suddenly were also energized, scoring 17 straight points to trim the gap to 28-23 going into the fourth period.

Tucker hit a 19-yard field goal to give the Ravens a 31-23 lead in the fourth period. He later hit a 38-yarder with 4:19 remaining after the 49ers cut the deficit to 31-29 to secure their second Super Bowl title.

Joe Flacco, who won the Super Bowl MVP trophy, completed 22 of 33 passes for 287 yards and three touchdowns and no interceptions while Jacoby Jones set a Super Bowl-record 108-yard kickoff return for a touchdown. 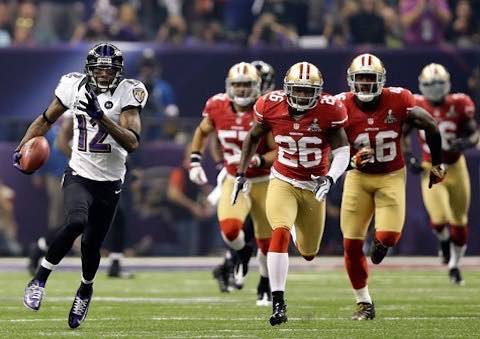 Flacco's 11 touchdowns in the postseason tied Joe Montana and Kurt Warner for most in a single playoff.

The Super Bowl win was a fitting send-off for veteran linebacker Ray Lewis, who is set to retire. Lewis tallied seven tackles in his final game. 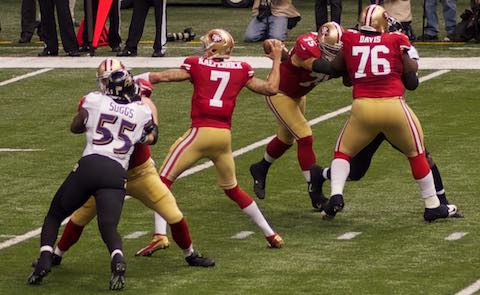 49ers' playmaker Colin Kaepernick hit 16 of 28 passes for 302 yards with a touchdown and an interception. He also ran for 62 yards on seven carries and a score in a losing effort.

Frank Gore rushed for 110 yards on 19 carries and a touchdown while Michael Crabtree tallied 109 yards on five catches and a score for the 49ers, who lost for the first time in six Super Bowl appearances.

Flacco delivered three touchdowns in the first half while Jones added a record run to give the Ravens a 28-6 lead early in the third period and looked headed for an easy win before the lights went out.

The power outage caused the Ravens to lose momentum in the game while it energized the 49ers, who scored 17 unanswered points in a span of four minutes and 10 seconds to trim the gap.

Luckily for the Ravens, Tucker was on target, hitting two crucial field goals to secure the win.