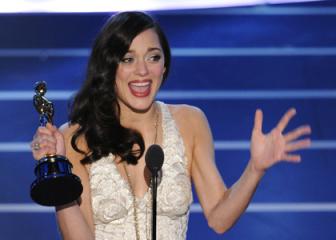 "Thank you life, thank you love, and it is true, there is some angels in this city." -- Marion Cotillard

Marion Cotillard won the 2008 Best Actress Oscar for her portrayal of the singer Edith Piaf in the film La Vie En Rose.

Marion Cotillard as "Edith Piaf" in La Vie en Rose - This is her first nomination and her first Academy Award.

The true story of her incredible destiny opens a window onto the artist's soul and into a woman's heart. The film "La Vie en Rose" follows Edith Piaf’s rise from the slums of Paris to the limelight of New York all the while struggling with her passionate romances and relationships with some of the greatest names of that time.

From the slums of Paris to the limelight of New York, Edith Piaf's life was a battle to sing and survive, live and love. Raised in poverty, Edith's magical voice and her passionate romances and friendships with the greatest names of the period - Yves Montand, Jean Cocteau, Charles Aznavour, Marlene Dietrich, Marcel Cerdan and others - made her a star all around the world. But in her audacious attempt to tame her tragic destiny, the Little Sparrow - her nickname - flew so high she could not fail to burn her wings.

The movie bears the title of her signature song: "La vie en rose." The song written in 1945 was voted a Grammy Hall of Fame Award in 1998.

Born in Paris, Marion Cotillard most recently appeared opposite Russell Crowe and Albert Finney in director Ridley Scott’s A Good Year, based on the internationally bestselling novel by Peter Mayle.

In 2004, Cotillard was honored with the Cesar Award for Best Supporting Actress for her role in Jean-Pierre Jeunet’s A Very Long Engagement. This followed two Cesar nominations for Most Promising Actress, the first for Gérard Pires’s Taxi (1998), the second for Gilles Paquet- Brenner’s Les Jolies Choses(2001). Cotillard appeared in two sequels to the action comedy Taxi, both directed by Gérard Krawczyk.

On this side of the Atlantic, Cotillard made lasting impressions in director Tim Burton’s Big Fish (2004) with Ewan McGregor, Albert Finney, Jessica Lange, and Billy Crudup; and Abel Ferrara’s Mary(2005) with Juliette Binoche, Forest Whitaker, Matthew Modine, and Heather Graham.

Cotillard will next be seen in L’Ennemi public n° 1 (Public Enemy No. 1) director Jean-François Richet’s take on the story of Jacques Mesrine, one of France’s master criminals during the 1970s, starring Vincent Cassel and Alain Delon. Filming concurrently, the sequel, Death Instinct, will co-star Cassel and Casino Royale’s Eva Green.

A spokesperson for Greenpeace, Cotillard was one of several actors, singers, and designers involved in “Dessins pour le climat,” a 2005 charity album, with all proceeds contributed to the environmental organization.

Despite numerous published biographies, many facts and events of Edith Piaf's life are shrouded in mystery. She was born Edith Piaf Giovanna Gassion in Belleville, Paris, the high-immigration district later described by Daniel Pennac. Legend has it that she was born on the pavement of Rue de Belleville 72, but her birth certificate states she was born at Hôpital Tenon, the hospital for the 20th arrondissement of which Belleville is part. She was named Edith Piaf after the executed British nurse Edith Cavell. Piaf - a Parisian colloquialism for "sparrow" - originated as a nickname she would receive twenty years later.

Her mother, Annetta Giovanna Maillard (1895-1945), was a part-Italian native of Livorno, a port city on the western edge of Tuscany, Italy. She was working as a café singer under the pseudonym, Line Marsa. Edith Piaf received her middle name of Giovanna from her mother. Louis-Alphonse Gassion (1881-1944), Edith's father, was a street acrobat with a theatrical past. Little Edith Piaf was soon abandoned by her parents, left for a short time with her maternal grandmother, Emma (Aďcha) Saďd ben Mohammed (1876-1930), (a Kabyle). Shortly thereafter, Edith Piaf's father took the child to his mother, who ran a brothel in Normandy, and he then joined the French Army (1916). Thus, Edith Piaf was in contact with the prostitutes and the various attendees of the brothel since her early years, a circumstance which must have had a deep impact on her personality and view of life.

From the age of three to seven Edith Piaf was said to be blind, while she suffered from conjunctivitis, and from eight to fourteen she was deaf and suffered from severe androgenetic alopecia. According to Piaf's biography she recovered her sight in what is known as a "miracle", after her grandmother's prostitutes pooled money to send her on a pilgrimage honoring Saint Thérčse de Lisieux. In 1929, at fourteen, she joined her father in his acrobatic street performances. She then took a room at Grand Hôtel de Clermont (18 rue Veron, Paris 18čme) and separated from him, going her own way as a street singer in Pigalle, Ménilmontant, and the Paris suburbs (cf. the song "Elle fréquentait la Rue Pigalle"). She was about sixteen years old when she fell in love with a delivery boy, Louis Dupont. Shortly afterward she had a child, a little girl named Marcelle, who died in infancy of meningitis.

In 1935, Edith Piaf was discovered by the nightclub owner Louis Leplée, whose club was frequented by the upper and lower classes alike. He persuaded her to sing despite her extreme nervousness, which, combined with her petite height of only 4' 8" (147 cm), inspired him to give her the nickname that would stay with her for the rest of her life and serve as her stage name, La Môme Piaf (The Sparrow Kid). Her first record was produced in the same year. Shortly afterward, Leplée was murdered and Piaf was accused of being an accessory, but she was acquitted.

In 1940, Jean Cocteau wrote the successful play Le Bel Indifférent, intended for Edith Piaf as the star. She began to make friends with famous people, such as the actor Maurice Chevalier and the poet Jacques Borgeat. She wrote the lyrics for many of her songs and collaborated with composers on the tunes. In 1944, Edith Piaf Piaf discovered Yves Montand in Paris, made him part of her act, and became his mentor and lover.

During this time, she was in great demand and very successful. Singing for high-ranking Germans at the One Two Two Club earned Piaf the right to pose for photographs with French prisoners of war, ostensibly as a morale-boosting exercise. She gave the photos to underground workers who made counterfeit passports for all 150 captives. After returning to the camp again, Piaf secretly transferred the passports to the Frenchmen, and some of them managed to escape. Today, Piaf's association with the French Resistance is well known, and many owe their lives to her.

After the war, she toured Europe, the United States, and South America, becoming an internationally known figure. Her popularity in the United States was such that she appeared on the Ed Sullivan Show eight times and at Carnegie Hall twice (1956 and 1957). She helped to launch the career of Charles Aznavour, taking him on tour with her in France and the United States.

The great love of Piaf's life, the boxer Marcel Cerdan, died in a 1949 plane crash. Piaf was married twice. Her first husband was Jacques Pills, a singer. They married in 1952 and divorced in 1956. Her second husband, Théo Sarapo, was a twenty-six-year-old hairdresser-turned-singer and actor, twenty years younger than Piaf. They married in 1962. By all accounts he was very taken with Piaf and doted on her till the end.

In 1951 she was in a car accident, and thereafter had difficulty breaking a serious morphine addiction.

The grave of Edith Piaf, Pčre Lachaise Cemetery, Paris at the early age of forty-seven, Piaf died of cancer at Plascassier, on the French Riviera, on October 11, 1963, the same day as her friend Jean Cocteau died. [2] She was buried in Pčre Lachaise Cemetery, in Paris. Although she was forbidden a funeral mass by the Roman Catholic archbishop of Paris (because of her lifestyle), her funeral procession drew hundreds of thousands of mourners onto the streets of Paris and the ceremony at the cemetery was attended by more than forty thousand fans. Charles Aznavour recalled that Piaf's funeral procession was the only time since the end of World War II that he saw Parisian traffic come to a complete stop.

There is a museum dedicated to Piaf, the Musée Edith Piaf Piaf at 5, rue Crespin du Gast, 75011, Paris.

Today she is still remembered and revered as one of the greatest singers France has ever produced.